A completely unbiased take on chocolate 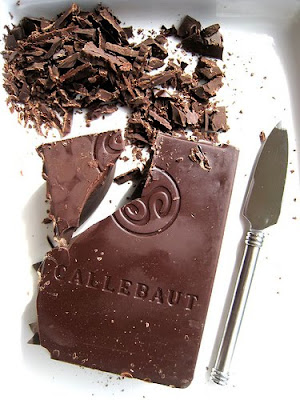 My friend, Bob, and I have this ongoing argument about chocolate.
Bob: Milk chocolate is the best.
Me: If you think that, you must be a pussy.
Chocolate lovers love bittersweet chocolate. End of story. They can also like milk chocolate, but they know that bittersweet is far superior, and that milk chocolate is a poor man's semi-sweet, which is a poor man's bittersweet. Milk chocolate is for those who don't like cilantro, olives, and Indian food. You know, people with immature palates. White chocolate won't even be discussed here.
The real argument is this: just how bitter should bittersweet be? Some people, like myself, favor a mellower bittersweet, while others like it so bitter, it borders on unpleasant, even punitive. In any event, bittersweet rules.
The best bittersweet is Callebaut, a Belgian brand that produces some of the most balanced chocolate around. I am in love with Callebaut and will defend it to my death. I know some people love Valrhona, and I will admit that its exotic names and wine-like complexity make it sexier, but give me the frank directness of Callebaut any day of the week.
When I worked in the kitchen, Callebaut came in whopping 11 pound blocks. Chopping large blocks of chocolate is about as fun as plucking one's nose hairs, one by one. After a day of chopping, I would go home and soak my wrists in ice cold water and try not to weep. But there is one extremely satisfying part of the process. To get it going, the chopper would lift the block over head, still wrapped in paper, and fling it to the ground, resulting in a resonant THUD! Sometimes, you might even get a THWAP! if it hit the ground just so. If you did this with vigor, or even better, in a murderous rage, the chocolate might break into ten or so pieces. But if you were tentative in your flinging - a tentative flinger - you'd be lucky to end up with two or three still barely manageable pieces. If someone was particularly pissed off that day, they automatically got the job.
Chocolate is moody, like my eight year old daughter, and that's why, when you prepare chocolate for coating (a melting process used in making candies and truffles), it's called tempering. Because it's like giving a child a bath. The chocolate may decide it's not in the mood to be tempered that day, and have a tantrum. I think this is why the French like chocolate so much - because chocolate is a challenge, like a beautiful, enigmatic woman who offers glimpses of availability and then just as quickly withdraws, enjoying the pursuer's misery.
Here are some good chocolate sources, in case you feel like getting in the ring with the beast.
Callebaut - available in smaller 12 - 16 ounce chunks at Whole Foods. Or through the website Chocosphere.com, which has every brand and product you'll ever need.
Valrhona - perhaps a sexier chocolate than Callebaut, but I still like my workhorse. Valrhona also makes an amazing cocoa powder (available at Chocospere.com) and a variety of bittersweet bars with varying degrees of bitterness for tasting.
La Maison du Chocolat - Makes the best plain chocolate truffles I have ever had, and they'll gladly ship them to you. I haven't been to their shop in New York, but have been to the one in Paris, and it was miraculous. The entire shop is cloaked in chocolate brown, from the walls to the carpeting. They have everything chocolate - cakes, candies, amazing macarons - and the taste level is exquisite.
Vosges - a Chicago success story. Exotic truffles and bars. They have a few shops around town, and also sell in Whole Foods.
As for milk chocolate, well, gee, have you tried Hershey's?
Posted by Wendy Kaplan at 10:12 AM 2 comments:

Living in a creamy alfredo world 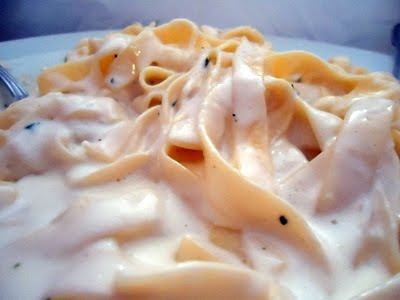 During the summer, my family and I traverse the 90 miles from Chicago to southwest Michigan on a fairly regular basis, passing through the soft, moist armpit of Indiana. Indiana is Americana; love of God and country come before just about everything else except maybe alfredo sauce.
I noticed this on our last visit, as we decided on a restaurant for dinner. We always seem to stop in Michigan City, Indiana, the land of outlet malls, and home to every chain restaurant in existence. If you look around the main drag, there's Steak n Shake, Chili's, The Olive Garden, Baker's Square, Denny's, Culver's, and the fast food Big Three: McDonald's, BK, and Wendy's. You can add to that Quizno's, Subway, Pizza Hut/WingStop......you get the picture.
My pick is always The Olive Garden (even though canned olives in my salad are a disgusting folly, they're also sort of delightful), which is overridden by the other members of the family, who inevitably pick Chili's. It's really all the same, now that alfredo sauce has infiltrated pretty much every fast food menu (At Chili's, it's Cajun Pasta with garlic alfredo sauce).
You won't really get an argument from me regarding alfredo sauce. Screw my arteries; it's a wantonly self-indulgent cloak on bland food, and besides, the heart wants what it wants. And mine wants alfredo sauce. Like, a big plate of it, with a side of fettucine, a big grind of pepper, and a squeeze of lemon. And yes, please pass the parmesan and the grater. I love the creaminess of the sauce mixed with the salty grit of the cheese, and the slithery slipperiness of the noodles. I don't know if there's a more sensorially pleasing food.
In Italy, there is no cream in the sauce, which is to say, we've taken something perfect and Americanized it. In Italy, it's all butter and cheese, and some pasta cooking water to emulsify those two perfect ingredients into something even more compelling. The Italians, who know a thing or two about pasta, know that the cream is superfluous, and perhaps even detrimental.
But try telling that to the Americans. I grew up with cream in my alfredo. I'm used to it, although once you taste the real version, it gives you pause. Oh, so that's what it's supposed to taste like. But I suppose once you start mixing alfredo with the likes of jalapeño and cajun spices, you're not much concerned with authenticity anyway.
Posted by Wendy Kaplan at 9:51 AM 1 comment: