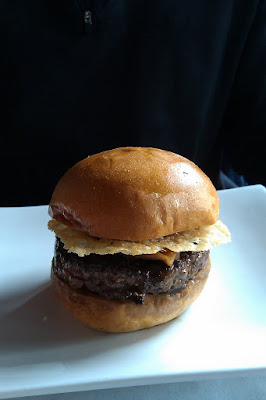 About a year and a half ago, I salivated profusely as I wrote this post. And then I sank into a period of depression that lasted nearly ten minutes because the prospect of actually tasting an Umami burger seemed almost impossible. Most restaurants only stay open a few years, and LA was a distant memory from my advertising past.
Well, ladies and gentlemen, I have been to the mountain, and the mountain has house-made American cheese and roasted green chilies and is one of the most decadently juicy, umamiest burgers I have ever had the pleasure to ingest. Umami, if you don't remember, is the fifth taste - the savory taste - alongside sweet, salty, bitter, and sour. It's responsible for us craving meat, mushrooms, roasted tomatoes, and anchovies for reasons both physiological and evolutionary.
Umami Burger is a burger place in LA devoted entirely to satiation on another, more primitive umami level. When I first heard about it a year and a half ago, Umami was a lone wolf on LaBrea. They offered burger after burger with topping combinations that were meant to up the umami ante. One, with beer cheddar cheese, onion strings, smoked salt, and bacon lardons, was called the Manly. The thought of something so testosterone-laden was almost too much to bear and yet so thrilling at the same time. I knew Umami needed to move to the top of my list.
Umami Burger now numbers four. Over the weekend, while in LA for a wedding, I went to the one at Fred Segal in Santa Monica. Fred Segal is a pretentiously hip and laughably overpriced fashionista department store. A friend once spotted Michelle Pfeiffer there trying on $300 jeans and declared her to be a size -2. But now Fred Segal has an Umami Burger, so they're ok by me.
The menu at Umami is confounding, only because there are so many crazy good options (interestingly, each Umami has a slightly different menu, presumably catering to its different neighborhood clientele). I ended up ordering the Hatch burger: house-made American cheese and four different kinds of roasted green chilies. The burger itself is perfectly formed and uniformly thick. It's delivered medium rare and dripping with juice. My husband got the signature Umami burger: same meaty burger, but with a roasted tomato, a shitake mushroom, and a parmesan crisp, or frico. The combination of these ingredients is supposed to elevate the umami experience even further. 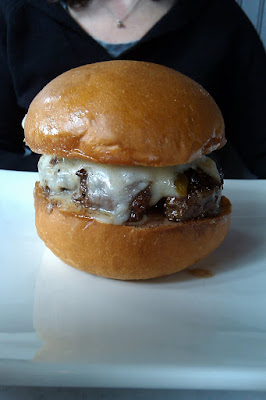 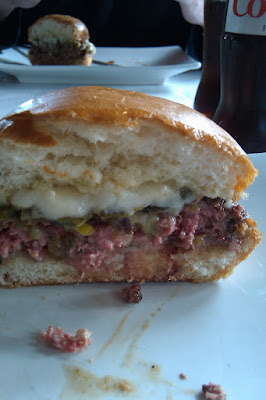 After tasting both, I decided that the Hatch (above) was actually umamier than the Umami burger. It had a depth of flavor I can't recall ever having had in a burger. I will forever be haunted by its creamy cheese, hot, biting chilies, and juicy, beefiness. 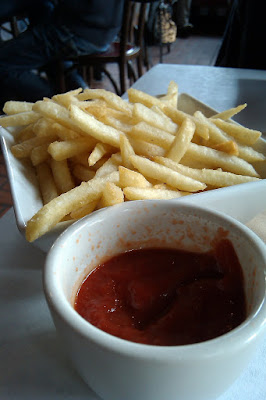 We also got an order of fries that came with a side of special Umami ketchup. A word about umami and ketchup: while I thought the umami ketchup at UB was delicious, Heinz is still king. As Malcolm Gladwell pointed out in his New Yorker article on the same subject, Heinz ketchup has achieved a level of umami that few products do. So while I appreciated the extra effort on the ketchup front, it ain't Heinz. But they did offer mexican Coke (as in Coca-Cola) which is made with real sugar and not corn syrup. Plus one, Umami Burger.
You're going to love this place.
Posted by Wendy Kaplan at 4:50 PM 2 comments: