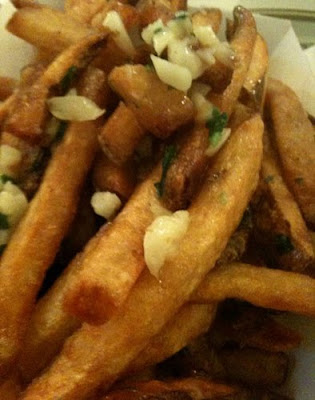 I have a new reason for living. Garlic fries at Edzo's. This is how strongly I feel: I would take a hollow-tipped bullet in my left eye socket for my kid, but he can kiss my mommy ass if he thinks he's getting any of my garlic fries.
I was there last Saturday, waiting in line with the rest of Evanston. It wasn't a Hot Doug's type of ritualistic experience, where you need to block out five hours, 20 minutes of which is for the actual eating. At most, it was 30 minutes from end of line to burger in hand.
Edzo's opened a few months ago in the spot that used to be Pita Pete's. I had a hate/love relationship with Pete's, but with Edzo's, it's definitely a groovy kind of love. The guy who runs the place - I'm guessing Ed to his parents - gets burgers. He gets the bun (soft yet supportive, and egg-glazed), he gets the toppings (everything includes pickles, onions, ketchup and mustard; stuff like sauteed mushrooms, a fried egg or giardiniera are extra), and he especially gets the meat, which is perfectly juicy and tasty, with just the right fat content and thickness for a fast food burger. They grind it in house everyday, and even offer an organic blend. If we all pay a mere two bucks extra for the good meat, we just might save the world.
Edzo's also offers 8 ounce charburgers, hot dogs in a variety of dress, a few appropriate sandwiches, and a tantalizing array of fries. I was intrigued by the Taylor Street version (Italian beef gravy and sweet and hot peppers), but the garlic ones called to me in a voice oddly reminiscent of a mellower Russell Crowe. The garlic is substantial yet sweet with no burning edge. It lives in a parsley butter that is judiciously ladled on, leaving nothing but crisp. I loved the burger, but I'll never forget the fries.
As for the milkshakes, they're real, too, and more than I could handle with a meal, but a perfect afternoon pick-me-up after a 12 mile run and 45 minute weight lifting session with Mr. T.
Ed didn't change the place much. The paint job looks like it's from 1974, as does the brand new 70's style supergraphic with Bozo type. He also didn't change the soda fountain - my only gripe - because Pepsi with burgers this good is a crime.
Posted by Wendy Kaplan at 2:43 PM 2 comments:

Actually, this is why we're stupid 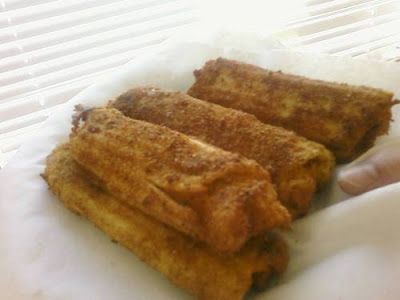 These are Deep-Fried Manicotti Dogs. I found them on thisiswhyyourefat.com. They're "chopped and fried hot dogs, sauteed onions, slopped with super cheesy rice and stuffed into manicotti tubes, then breaded and deep fried." I never could have come up with the word "slopped" in that context.
At gun point, I might serve these with a spicy ketchup (Heinz + canned jalapenos) at a Superbowl party, alongside Seven Layer Dip (heavy on the sour cream) and Stuffalo pizza. For dessert, Ambrosia in Dixie cups.
thisiswhyyourefat.com is one of those high concept/low content websites that has somehow managed to generate enough material and interest to produce a book. Even though I'm embarrassed - for the creator, the publisher, and our country at large for so easily coming up with the menu - I'm also filled with the sour juice of envy. Apparently, decent writing and a butter knife-sharp wit doesn't hold a candle to boston cream pie wrapped in a basketweave of bacon.
As over-the-top as some of this stuff seems (The Meta Meat Cake should be detonated), we both know this is what Americans really eat. They laugh at the frightening absurdity of it, and then grab a fork. Afterward, they retire to the couch with a large bowl of Raisinets to watch The Biggest Loser while scrolling through peopleofwalmart.com to unwittingly snicker at themselves.
If you offered the average American a choice between a large tossed salad and a beer-battered bologna and cheez whiz sandwich, we all know which one would win. And I don't think I'm being cynical when I presume there's a persuasive correlation between intellectual capacity and ounces of Bugles and Bagel Dogs consumed.
So, in the spirit of activism, I'm starting a movement. I'm calling it "Up with Cruciferous Vegetables!!" Brussels sprouts, cauliflower, kale - if it's gas-producing, it's in the manifesto. I'll start a website, make t-shirts, write a book with profanity-laden, veggie-focused one-liners. Alice Waters will host a book signing at Chez Panisse and then cook a six-course meal centered around broccoflower. It's time to take back America, people! Who's in??
Posted by Wendy Kaplan at 1:15 PM No comments: 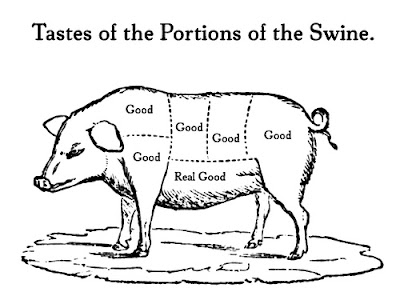 Anyone who knows me can glean from my musical taste - and choice of shoes, for that matter - that I don't give a monkey's rear what's "in." The sentiment extends to pretty much everything, but especially food. When it was "in" to risk your life eating blowfish, I happily nibbled on my spicy tuna roll, eagerly anticipating death at the next table. When eating raw food was the next big/silly thing, I was braising a brisket for six hours. When chocolate makers likened the complexities of chocolate to those of wine, I tossed it off as nonsense and took a big bite of my Dove bar.
Now, there's pig. It's everywhere, in every form, from charcuterie to popcorn seasoning to sundae topping. Restaurants are designing whole menus around the whole pig, trying to feature as many parts as possible (Paul Kahan loves fried pork rinds and pig's ears). Salumerias are opening up all over (Mario Batali's dad, Armando, has a good one in Seattle) and there are blogs with large readerships devoted entirely to bacon. Pig is in, and this time, so am I.
It's pretty hard to deny the sheer gastronomic pleasure of pig. The other day, I bought a package of speck, which is a tissue-thin cured, smoked ham traditionally from Austria. It was a revelation - salty, tart, slightly sweet, lusciously fatty, and somehow in all that big flavor, delicate, too. I ate half the package. Chicken will never be pig.
Restaurants like The Publican and the shiny, new Purple Pig are pork wonderlands. Platters of thinly sliced cured ham, fried pork rinds, pig ears and trotters - it's a total body experience. The Purple Pig offers an appetizer of pork fried almonds, and numerous incarnations of pig parts, notably pork neck bone rillette with mostarda, a more down home take on pate.
There's even pork in desserts now, which I will not endorse until I've had my taste. Just the other day, I was at Belly Shack, a casual offshoot of the Asian place Urban Belly (lots of pork on that menu) and somehow missed the bacon chocolate chip sundae.
Which brings me to the next big thing: real dairy soft serve. Post forthcoming.
Posted by Wendy Kaplan at 1:47 PM 2 comments: