Back in the saddle again, part 1 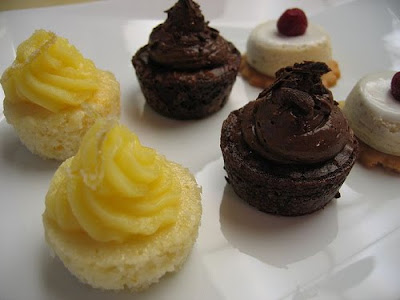 Those French, they have a different word for everything. - Steve Martin
In this case, the word is mignardise. Tiny tasty things served at the end of a meal. This week, I'm making Asian-inspired mignardise for an event at an art gallery. After exactly zero seconds of contemplation, I jumped at it. Why torture yourself with self-doubt? How hard can it be? The menu is as follows:
Roasted pineapple financier
Chocolate marquise
Ginger plum cheesecake
Green tea shortbreads
At the top of my grocery list is 5 Hour Energy Drink. I'm not young anymore, and these things have a way of making you curl up in a corner and cry because you've just gotten your ass kicked by a bunch of petit fours.
Besides, anyone who's worked an event knows that events are fraught with mishaps. The first event I ever did was a grand, multi-day gig at a fancy hotel in Maui. It involved making desserts for three different meals over the course of three days in an enormous, unfamiliar hotel kitchen. It also involved making ice cream for 150 as part of the first night's dessert. If anything can kick your ass and make you feel like a complete moron, it's ice cream. But making it isn't the issue. Serving it is.
When it came time for dessert, my chef asked me if the ice cream was broken down. I had no idea what he was talking about, and when he realized I had no idea what he was talking about, the look in his eyes was panic of an order I had never seen.
"You didn't break down the ice cream?" he shrieked.
Breaking down the ice cream is softening it and then dividing it up into three or four containers so that several people can scoop it at one time. If only one person scooped from a giant tub, it would take 2 hours to serve 150 people.
At the time, I didn't know this. Now, I do. It took two large polynesian cooks to whittle away at the huge block of super frozen ice cream. I think they used machetes.
I moved on, thinking how many moments of stupidity can one person have during a three-day event on Maui? But the next night, when it was time to unmold the pineapple financiers for 150 (yes, the same thing I'm making this weekend, only a mini version), those sadistic little almond cakes refused to come out of their molds in one piece. I tried paring knives, tiny offset spatulas, a scalpel. I was terrified. I imagined myself bringing the trays of shredded little financiers to the chef and pleading, Please don't throw a sheet pan at me, an act of pastry retribution by many pastry chefs, mostly French.
It took me over an hour to get them out, just in time for dessert service. A few of them looked like they had been in a dog fight. But the great thing about dessert is that it comes last, after many glasses of wine. No one noticed.
So here I am, anticipating any mishaps, hedging my bets, making my grocery list. Like Tiger Woods, I feel confident. I feel like I'm going to win this one. I'll keep you posted.
Posted by Wendy Kaplan at 10:46 AM