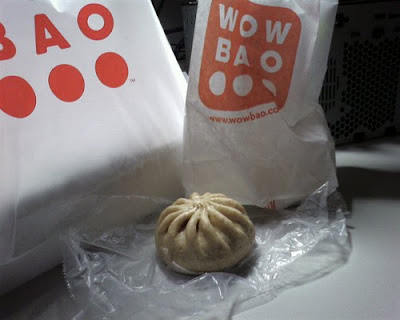 As much as I'm opposed to clever names - and rhyming - I don't really mind Wow Bao. Of course it's a Lettuce Entertain You venture and you know this because marketing-wise, it's tight as a Chinese war drum, with a clean, eye-catching logo and that name. It's just so confident. Not many things are Wow these days, and I don't know if Wow Bao really lives up to its name, but hey, LEYE executive types, props to you for trying. 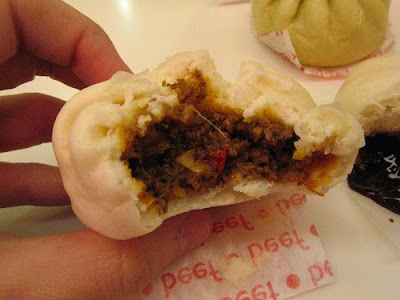 A bao is a Chinese steamed bun with a filling. Pork is probably the most common, and makes the bao into a kind of Chinese slider. A slider is never a bad thing. The dough is like a fine, soft bread dough without the crust. Put peanut butter and jelly inside, and my daughter would eat these for life. The fillings range from thai curry chicken to spicy mongolian beef to whole wheat edamame. They're soft little savory Chinese treats, and with one of their Asian salads or soup, make a respectable lunch.
They also have dessert and breakfast bao, which I haven't tried but fear are a bad mating experiment between Dunkin' Donuts and Chinese takeout. You could put anything inside that dough, but that doesn't mean you should. With that said, I'll keep an open mind and next time, have a coconut custard bao. It sounds gross - all sweet, starchy mush - but I'm willing to take one for the blog.
Wow Bao also has homemade ginger ale, which shot to super stardom years ago at Big Bowl, another Lettuce concept. I've included a rough recipe at the bottom. Not to sound like a second grader but, it's so easy.
If there was a Wow Bao in Evanston, I would go once a week. I would get a Bao combo: two Bao ( I like the Thai curry chicken and spicy Mongolian beef) and a choice of their Asian salads, which are fresh and appropriately Asian-inspired. I would also get the ginger ale. It sort of completes the picture.
Homemade Ginger Ale
1 knob of fresh ginger, peeled and sliced (about the size of a small finger)
1 1/2 cups of sugar
1 1/2 cups water
Seltzer water or Club Soda
First, blanch the ginger by placing it in boiling water for about a minute, then drain. This mellows out the burn of the ginger. Rinse the pot, then put the sugar and cup of water in it along with the drained ginger. Bring to a boil, and boil for a couple of minutes. You're doing this to dissolve the sugar, so only boil it long enough to achieve that. You have now made a ginger simple syrup. Let cool, and store overnight in your fridge, covered.
To make the ginger ale, just add some ginger simple syrup to some seltzer or club soda. Start by adding a Tbs and keep adding until it tastes right to you. Other things you can add to the simple syrup when you add the ginger: citrus zest (just the colored part) or a split vanilla bean. If you want more syrup to make a big batch, just multiply up. The ratio of sugar to water is always 1:1. Assuming your fridge's temp is constant, the syrup should keep for two weeks.
Posted by Wendy Kaplan at 12:39 PM