M is for meh 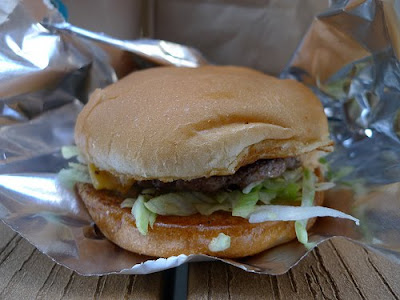 Burger disappointment is hard to take. It's like having a bad cupcake or a bad ice cream cone. It just feels morally wrong, like the perpetrators should have to formally apologize and admit their wrongdoing publicly, in the town square, and perhaps in the most egregious cases, submit to a flogging.
That's how I feel about M Burger. It's a dark little crevice on Huron, just east of Michigan Avenue. There are no seats inside, which is a good thing since there's no ventilation in there, either. But you can sit on the benches on the sidewalk, where you'll likely share a table with a pregnant couple who just visited their OB at Northwestern Memorial. You can watch the woman eat a double with bacon and secret sauce and then finish all the fries and the chocolate shake and remember fondly back to those pregnant days, when you use to eat half a dozen Krispy Kremes at one sitting.
But the thing is, Krispy Kremes are good. The M Burger is not. There's nothing special about it, and once you've had a truly special burger (like at Edzo's), you immediately know after the first bite whether this thing you're eating is stuck in the bottom half of the burger bell curve, a step above a Quarter Pounder with Cheese, and even that is debatable.
My issue is with the meat (some would argue the most important part of a hamburger). Normally, I like my burgers to taste like meat. But the M Burger really didn't taste like anything at all. If it had tasted like pistachios or creamed spinach or something else entirely, I might applaud the attempt at avant garde and maybe give a few points for creativity. But when the goal is a conventional fast food burger, it's all about the meat.
There are different versions of the M Burger. I had a single with everything, which includes lettuce, onion, pickles, ketchup, mayo and cheese. There may have been a tomato on it. If so, I couldn't taste it. A signature M Burger has bacon, cheese and secret sauce. All burgers are available single or double. They have fries and shakes, too, and something called the Nurse Betty, which, according to one Yelp reviewer, is a vegetarian burger sans a burger (a bun burger?). It's also a movie with Renee Zellweger, who is thoroughly annoying, too skinny and probably would prefer having a bun with condiments over one with meat. Both she and M Burger need to go away.
Posted by Wendy Kaplan at 11:22 AM