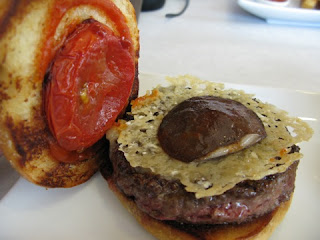 Ever since I read this article by Malcolm Gladwell about ketchup, I've been sort of obsessed with umami. To oversimplify, a human being can taste five distinct flavors: sweet, salty, sour, bitter, and the fifth, umami, which refers to the meatiness or savoriness of something. Foods like soy sauce, seaweed, mushrooms, and red meat fall under the umami umbrella. I think of it not as the meat itself, but as the craving or sensation that makes you want to eat something like meat. Those who study umami think it's primal, and has to do with our need for amino acids, which make up the protein in meat.
I have a deep and primitive connection to umami. When I simply read about umami, my salivary glands go a little nuts. My favorite things are umami things: parmesan cheese, mushrooms, tomatoes, a good steak. So when I discovered the Umami burger, I almost wet my pants.
It's on the menu at Umami Burger in Los Angeles. How is it that a town with so many weight-obsessed people has so many freakin' burger places? Fatburger, In-n-Out Burger, Tommy's Burger, plus all the one-off's. In a place where no one eats, who's eating at the burger places? This makes no sense to me.
Umami Burger is geared toward the umamivore. Every burger on their menu is savory to the nth degree. The namesake burger has a roasted tomato, a shitake mushroom, a parmesan frico (a crisp parmesan wafer), and umami ketchup (with secret umami ingredients), all on top of a juicy burger, then served on a brioche bun (pictured above). Umami to the core.
Other burgers include the Triple Pork burger, which is ground pork seasoned with chorizo and cob-smoked bacon, topped with a slice of manchego cheese and pimenton aioli (Spanish paprika mayo), as well as the Manly burger, which is dressed with beer-cheddar cheese, smoked salt onions, and bacon lardons. I could conceivably become a man if I ate that burger.
Deep down, we're all umami-loving cavemen. I know I am. That's why I like Benihana, a good portabello sandwich, and Heinz ketchup (the umamiest of them all). So next time I'm in LA, near LaBrea and 8th, I'm going to check out Umami Burger. I'll order the namesake, let all the savory juices drip down my chin in true caveman fashion, then maybe I'll do a little chest thumping. Could be interesting.
Posted by Wendy Kaplan at 7:06 PM