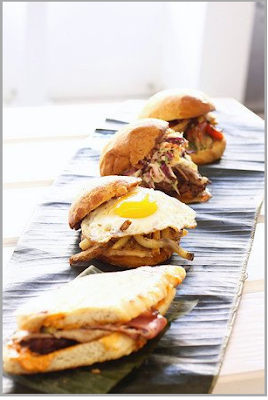 If there's one thing I fret about, it's a missed opportunity. Take last weekend. I went to Ann Arbor, one of my favorite food places in the world. It's not quite the food holy land, but it's close. One reason is Zingerman's, the world's greatest deli. If $15 sandwiches seem like highway robbery, you've never tasted Zingerman's Bakehouse rye. Or their Georgia Reuben, or Pat & Dick's Honeymooner, or the sublime mushroom barley soup, or the brownies....do I need to go on?

But last weekend, I missed out on Frita Batidos. I had never heard of the place until I stumbled upon a spirited discussion about it on a football blog (my other passion) a few days ago. Its proponents declared it the next coming in Ann Arbor, so I decided to check out the website. I figured with that name, it was a nacho place. You know, refried beans, sour cream, a Latin bandito with a six-shooter in one hand and a margarita in the other, welcoming you inside.

What I found was a revelation, as these things go. A modern Cuban-inspired sandwich place, with beautifully plated food, sides of rum-soaked pineapple, and fruity tropical milkshakes (I'm close to tears).

A frita, I learned, is a Cuban burger made from spicy chorizo. The ones at Frita Batidos are served on an egg bun with chili mayo and shoestring fries on top. But you can also get a fish frita or a black bean frita or one topped with a fried egg or cilantro lime salsa or tropical coleslaw, or all three. And if you don't want shoestring fries on top, that's fine, too, although who would be that foolish?

Other ridiculously great-sounding sandwiches include seared shrimp, cilantro oil, pea shoots, and bermuda onion on brioche, and the Inspired Cuban: aromatic roast pork, tasso ham, thick bacon, gruyere, cornichons and chipotle mayo on Cuban bread. You can also get a bucket of fried smelts, which I might consider here, or the Best Snack Ever, which is beans, rice, salsa, and cheese. Something tells me its simplicity belies its complexity.

Come October, when I return, I will grab a seat in the window and eat my fish frita with tropical coleslaw and drink a perfectly tropical batido (guava maybe?) and be happier than a human has a right to be.