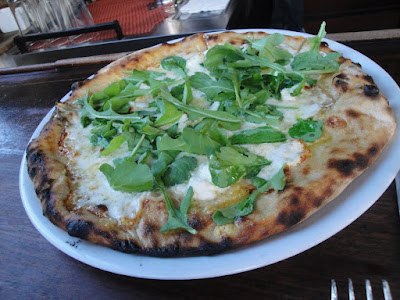 The last scene in the movie, “The Graduate,” still confounds me. Ben has just stolen the doe-eyed and very un-Jewish Elaine Robinson from her pristine church wedding after a stressful, empty gas tank pursuit. As they board the crosstown bus, victorious, and grab a seat in the back, we hear Paul Simon sing, “Hello darkness, my old friend…..” Their faces move from elation to remorse, from victory to loss.

I couldn’t help but wonder, as I woke up last Thursday morning, the morning of my final pursuit of Chris Bianco’s nationally lauded pizza, was it all about the chase? Once you got the prize, was it no longer prize-worthy?

I spent an entire week, three years ago, in pursuit of the prize, enduring an almost two-hour wait just to get on the waiting list, which, we were told, was four hours long. Six hours for pizza? There was clearly a chance that Chris Bianco was, in fact, Elaine Robinson in a flour-dusted chef's coat. But when you're in the chase, the prize is just that much shinier.

We arrived at 5 o’clock on that beautiful Thursday evening and put our names in. There was no line, but we were told the wait would be about an hour, possibly less, so check again in about 30 minutes.

The area surrounding Pizzeria Bianco is surprisingly un-Phoenix-like. No signs of desert, just a little cobblestone street closed to traffic with a few older brick buildings. Pizzeria Bianco owns two of the buildings, the restaurant and the bar next door, where they have checker and chess boards set up, presumably for patrons to endure the long waits. Feral cats roam around, which is entertaining if you like cats. I do, especially when the inexperienced try to sidle up to them and get hissed at.

After milling around for 50 or so minutes, we were seated. I already knew what we would order, having read the menu fifty or sixty times over the past three years: the Margherita, the Wiseguy, and the Biancoverde. We also ordered the spiedini (fontina wrapped in prosciutto and grilled, kebab-style), and a big plate of olives, which I ate myself. 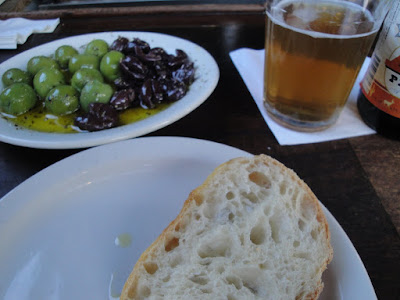 To start: bread, olive oil, and olives. A girl could live on this.

Wood-fired pizza is ubiquitous nowadays and I credit Chez Panisse for that. Alice Waters, and her co-chefs, have been cooking in wood-fired ovens since the 70’s. So when our pizzas came and I took the first bite, the crust didn’t wow me. Everyone’s doing it, and a lot of people are doing it really well. This was good crust, but not religious crust.

But as I invested myself in this pizza – first, with the Biancoverde, a white pizza with olive oil, fresh mozzarella, and fresh arugula, then the Wiseguy, another white pizza, this one with fresh mozzarella, fat slices of fennel sausage, caramelized onions, and my addition of wood-roasted mushrooms – the flavors started to haunt me (as I write this four days later, I can still taste the mushrooms). 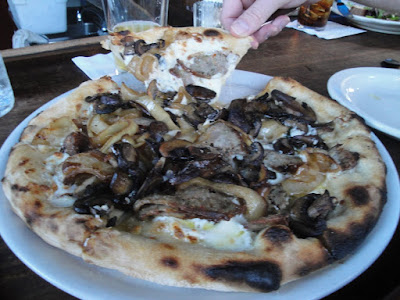 My dining companions and I fought over that Wiseguy, each eating our allotted pieces as fast as we could so we were guaranteed another piece. I speared anything that fell back on the serving plate, especially the mushrooms, which were revelatory as far as fungus goes.

The Biancoverde was the most visually pleasing and lightest of the three. Salty cheese, peppery arugula and olive oil have been done before, but the ingredients here, especially the cheese, made it taste better than most. 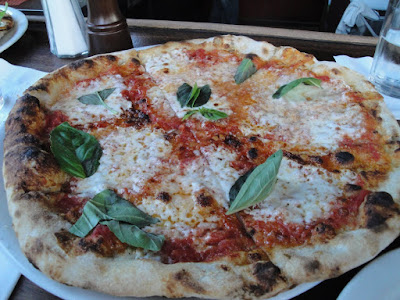 The Margherita: mozzarella, tomato, and basil

I didn’t try the Margherita until the next morning, when I had the last two pieces for breakfast. Even then, the flavors were bright and the cheese was admirably salty. Any pizza that can sustain its flavors after 12 hours in a cardboard box, in an iffy hotel refrigerator, is a pizza worth standing in line for. 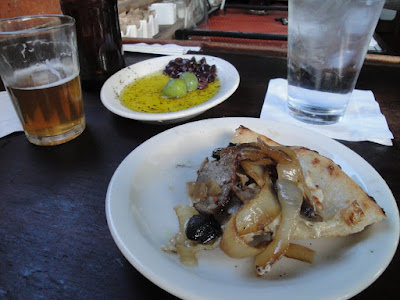 A really good meal: A slice of Wiseguy, olives, and a glass of local beer.

Pizzeria Bianco, with all its PR-driven hype, was surprisingly unpretentious. No hip music. The waiters did not have an exaggerated sense of their importance in the relationship. And the sparkling water was from Arkansas. But the best part: they thanked us for waiting.