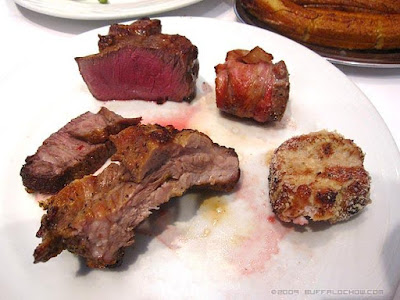 "Too much of anything is too much for me." Pete Townshend
It's been two days since my unapologetic meatfest at Fogo de Chao and I'm still not right. We went to celebrate my son's entrance into manhood, otherwise known as his 11th birthday. He is a carnivore first class, the kind that would have meat (and by this, I mean beef, pork or lamb, or preferably all three) for dessert.
Fogo de Chao is a Brazilian churrascaria/circus that's more of an event than a restaurant. I hate these kind of places. They charge $8 for a bowl of ice cream. And that's not even what you come for.
You come for the meat. Fifteen different kinds, mostly beef, all brought to the table by swarthy Brazilians in white blousy pirate shirts, knickers, and the male equivalent of tough leather bitch boots. The meat is speared on a sword, and the aformentioned gauchos slice it off at your discretion with giant machetes. Sirloin, garlic sirloin, bacon-wrapped sirloin, pork ribs, leg of lamb, lamb chops - it's obscene.
The meal starts with a visit to a vast salad bar. The waiter tells you to save room for the meat, but it's nearly impossible to act with restraint. There are marinated vegetables like asparagus, artichokes and beets. Cheeses, salumi, roasted potatoes, Brazilian slaw, bread, Spanish olive oils, olives and roasted peppers. Who needs meat with all this?
Then the sides come. Cheese biscuits, garlic mashed potatoes, fried polenta dusted with grated cheese and fried bananas. I was already feeling somewhat sick at that point, so when the first cut of meat came (plain sirloin), I wasn't nearly as excited as I had hoped. I felt more obligated than anything. We're paying good money for all this flesh, so I had better eat a lot of it.
The sirloin was followed by garlic sirloin, then lamb, then I lost track. I know there were sausages, because I had one. They refilled our mashed potatoes and polenta several times, so we must have cleaned those plates, too.
It was Henry the VIII gluttony, and I didn't feel good about it. I'm trying to downsize across the board, you know, use less of everything, and this didn't fit into my plan at all. And so, when the kids wanted dessert, we said yes, have the $9 slab of cheesecake and the $8 bowl of chocolate ice cream that they probably picked up down the street at Walgreen's. A birthday is a birthday.
Post script: In the middle of the night, my 8 year old daughter appeared in our bedroom to inform us she was going to throw up. And she promptly did.
Posted by Wendy Kaplan at 6:04 AM