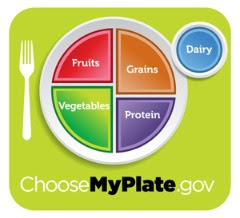 I don't know if you've heard but the government just came out with a brand new set of dietary guidelines. In a hideously art-directed graphic, the government has submitted My Plate for our perusal, a paint-by-numbers directive for the obvious impaired. Apparently, the Food Pyramid was confusing.
Whatever. I'm not going to make a judgment on the intelligence of our society as a whole. Rather, I'm going to pull out my well-worn copy of Vegetable Love by Barbara Kafka, and every other vegetable-loving cookbook I have, and get to work. Because vegetables are now getting top billing.
Surprisingly, I'm ok with this. I, like Barbara Kafka, love vegetables. It's surprising because I didn't eat a vegetable until I was safely into my 20's. When I questioned my mother about this recently, not only did she agree with the vegetable assertion, she also added that I probably didn't eat anything healthy - anything - until I was in my 20's. But, she added, you were happy.
My mother's idea of vegetables was canned peas. She put those army green pellets in everything, from creamed tuna fish on toast to my Stouffer's Chicken a la King, for some extra vegetable oomph. This was the same mother who regularly took us to White Castle for dinner, and gave me Wonder bread sandwiches filled with bologna and mayonnaise for lunch. And the same one who bought boxes of Hostess treats and counted them as more than adequate after-school snacks.
So here I am, pulling out my Greens cookbooks, from the eponymous restaurant in San Francisco, two tomes by Deborah Madison, the former Greens founding chef, and a delightful softback I found at the Ferry Building in San Francisco on market cooking. The one by Barbara Kafka, Vegetable Love, has a lot of recipes for stuff no one eats anymore (like carrot raisin salad from the 7th grade cafeteria), and soups made with three ingredients (celery, salt and water - from her lunch with Gandhi?). I like her because she bears a resemblance to Bea Arthur. Every time I open her cookbook, I imagine standing in Maude's Tuckahoe kitchen, making Feminist Salad with Adrienne Barbeau. The likeness, at least in my mind, is that striking.
Vegetable Love is encyclopedic in its breadth, with chapters on everything from broccoli to fennel to the wide world of lettuce. It even has an entire chapter devoted to Odd Roots, like scorzonera, which I've never heard of, and burdock root, which looks like a hairy stick. I'm not going to eat these things, but it's nice to know that if the world ends tomorrow and we all have to forage for our food, everyone will come to my mud hut for burdock tempura.
Posted by Wendy Kaplan at 9:12 PM