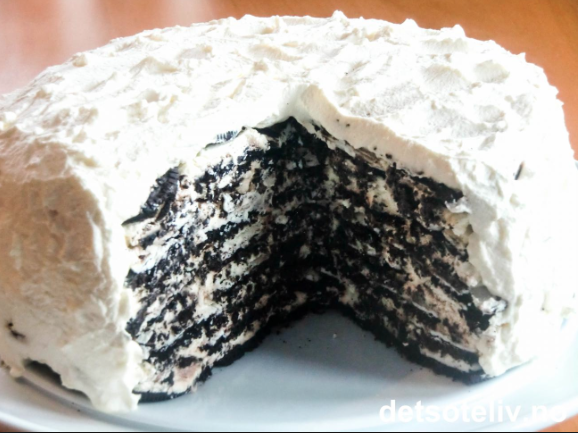 Did your mom ever make this for you? Mine did. It's an icebox cake made with Nabisco chocolate wafers and whipped cream. The recipe's on the box. My electric can opener-loving mother would make real whipped cream (a miracle, really) with her hand-held mixer, and add just a little sugar and vanilla. Then she'd let the whole thing sit in the fridge for a good few hours so the crunchy wafers would soften into cake. In those few hours, a mysterious alchemy would transform two disparate elements - thin crunchy cookies and billowy whipped cream - into a cold, dense torte, the edgy cocoa cutting the unctuousness of the cream. It was a marvel, especially when made by someone with a deft hand and an innate sense of proportion. My mother had both with this cake.

The flavor is somewhat bland, as many desserts of the 20th century were. There's no salted caramel or puckery yuzu or bitter cocoa nibs. Just one note chocolatey wafers and a blanket of cool dairy cream. It's probably the single most comforting dessert I can think of. I'm going to make it for my kids soon, knowing that its simplicity might be lost on them as they measure it against the exotically flavored cupcakes to which they've become accustomed. Then again, they might fall in love with it. Like I did.