The city of light and crazy bread laws 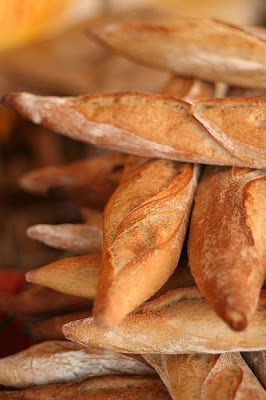 I love Paris, and everything about it, except for the fact that they speak French and expect me to, as well, and then arrogantly scoff when I sound like Inspector Clouseau. But I love it anyway. And it has little to do with the light, and much to do with the bread.
Man might not be able to live on bread alone, but I can, when I'm in Paris. In that, I include croissants plain, chocolat, and especially almond, various bread-like pastries including but not limited to cannelles and baba au rhum, the vast array of baguettes, batards, fougasse, and boules, and the sandwiches and tartines which are borne out of them. Give me a good French loaf and I will never, ever need therapy.
Of course, it helps that Parisians put as much money and research into bread as the US does into its space program. There's new science on how best to leaven the dough, hundred year-old sourdough starters with royal lineage, and of course, the Grand Prix de Baguette to determine the best loaf in the city. This year's winner: Le Grenier de Felix. By all means, go there.
Paris is probably the only major city that has laws governing how baguettes are made. A baguette traditionelle can have only four ingredients - flour, water, salt, and leaven or yeast - and it must be baked on premise, and kneaded by hand. Our prisons are filled with soulless murderers and greedy embezzlers; theirs with bakers suffering from severe carpal tunnel syndrome who secretly pulled out their Kitchenaid mixers in the wee hours to knead the baguette dough and got caught.
One of my favorite boulangeries is Poilane, on the Rue de Cherche-Midi, and I swear it has nothing to do with the fact that the bakers, faced with Hades-like heat given off by the basement ovens, have been known to shed their uniforms and perform their duties in just underpants, although a nearly nude, sweaty Frenchman stoking the fire does hold a randy appeal. It was at Poilane that I discovered the walnut boule - the walnuttiest thing I have ever tasted. I consumed an entire loaf on the trip back to my hotel, a feat of which I am extremely proud. Gluttony in Paris is so much more attractive than it is here in the States, probably because special sauce is not involved.
In five months, I'm heading back to the fatherland (in Paris, the kitchen is a man's world) to partake of as much bread as my system will allow. And I will happily slather every piece with butter because as great as the bread is, have you ever tasted the butter?
Posted by Wendy Kaplan at 10:25 AM