The case for lard 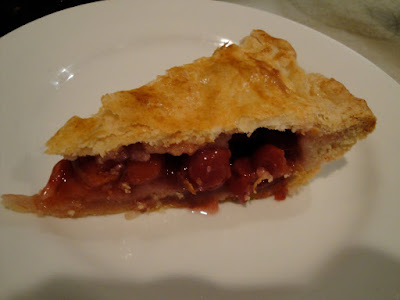 When I think of the word "lard," it's virtually impossible for me not to attach the word "ass" to the end. Nothing says sedentary housewife from Iowa like the word "lard-ass" and nothing contributes more to lard-assism than lard. At least that's what my inner judgmental self says.
According to the Urban Dictionary, a lard-ass is a person who is not only useless but who also weighs a ridiculous amount. So it's pretty clear how lard got its unflattering reputation. Lard is the evil fatty substance that gives women, especially those from the plains states, their big, jiggly butts.
Ironically, nothing makes a better pie crust, and I now know this from experience. Exhibit A: my first pie of the season, above. A beauty, with sour cherries from the sour cherry capital of the world, Michigan, and the best crust I have ever made. That's a pretty ambitious statement, considering how many crusts I've made in my life (I'm counting all the tart and puff pastry shells, too, because crust is crust). Hundreds? Maybe thousands. But never with lard. And I have to attribute that to a fear of lard, and the pronounced dimpled ass that goes along with it.
But the nutritional data doesn't support the fear. Butter has more saturated fat and cholesterol than lard, assuming the lard is not hydrogenated (more about that later). Lard, in case you don't know, is pig fat. It's rendered, or melted down, and then strained of the lingering bits. It is then refrigerated to solidify.
When lard is processed, however, evil corporate scientists hydrogenate it (a chemical process that improves shelf life), and this makes it an enemy of your arteries and ostensibly your hiney. But pure, high quality lard is available via mail order. It's generally called leaf lard. If you're at all squeamish, now's the time to skip to the next paragraph. Leaf lard is the fat that accumulates around the kidneys of the pig. Not very appetizing, but surprisingly healthier than its processed cousin. The fat is rendered, strained and then chilled or frozen.
My pie crust was dreamlike in its flakiness with nary a taste of the barn. It stayed flaky for a couple of days, even in the warmer weather. And it was easy to work with. When you have two children, the last thing you need is a pie crust with an attitude.
Lard is also said to reign supreme in the deep fryer, producing a virtually greaseless, crispy crust. I am completely unashamed to admit that I am now lard's number one fan and I will be aggressively pursuing perfect fried chicken in the days ahead, once my $18.00 leaf lard arrives. I'll keep you posted.
Posted by Wendy Kaplan at 2:10 PM