Monsieur Mulot is in the building 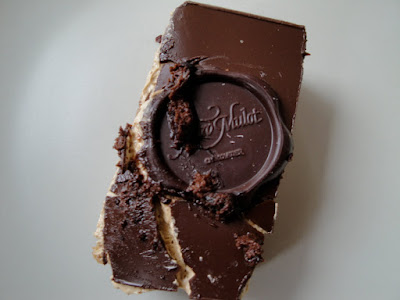 I might as well admit to you now that I've always been a groupie. In college, I was a groupie of Robert Palmer. I was addicted to the Addicted to Love guy. After a show at Radio City Music Hall, I managed to sneak backstage for his post-concert party. I sat next to him on a settee for more than half an hour before coming up with something really charming and witty to say ("um, I really liked the show"). I then got up and left. I never said I was a good groupie.

So when I was at Gerard Mulot yesterday, and Gerard Mulot himself emerged from the kitchen, familiar feelings - Robert Palmer feelings - kicked in. Oh my God, there he is! It's him! It's GERARD MULOT!

Gerard Mulot is a very tasteful and expensive patisserie in the 6th. Chocolates cost about $100/kilo (Just for comparison's sake, a pound of Fannie May Mint Meltaways runs you about $22.99). I've had my eye on Mulot for more than 15 years. His is one of about ten standout patisseries in Paris that always get mentioned in New York Times articles about standout patisseries in Paris. And there he was, on a Sunday, tending to things in his shop. 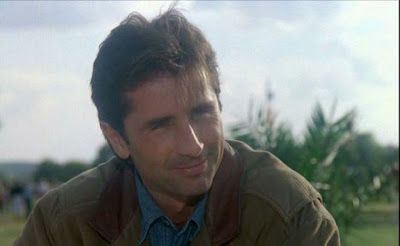 a French comedic actor with devastating blue eyes, or I might have left my husband on the spot. Monsieur Mulot is more of a Tim Kazurinsky type - slight and spectacled and persnickety. He had a discussion with one of the patrons, a well-to-do woman who was asking about a cake. I tried not to stare, and I certainly wasn't going to take a picture, and risk looking like the groupie that I am. Plus, he was no Thierry Lhermitte.

We got a few jambon sandwiches to go, some pate de fruit (fruit jelly candies rolled in sugar), and two gateaux, a delicieux and an opera.

As we spent the day at the Jardin du Luxembourg, doing things French families do, I thought the cakes were safe in their cute, pink Gerard Mulot box. But when we got home, a different story emerged (see sad photo at the top).

The delicieux and the opera had collided. The opera - a classic French pastry with layers of genoise, coffee buttercream, and chocolate ganache - took the brunt of it. My Mulot masterpieces were Mulot-perfect no more. But even in its devastation, it's quite lovely, don't you think?
Posted by Wendy Kaplan at 2:39 PM