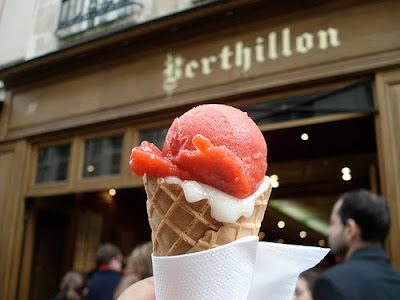 On Friday, I'm heading to the pastry motherland, with a quick 6 hour layover in Queens. I haven't been to Paris in 15 years, so I haven't spoken French in as long. The performance anxiety is setting in, the fear of being an ugly American is palpable, and I hope to God we can figure out the metro map. I have places to go and things to do and gateaux to see.
I love Paris in a fawning, slightly embarrassing kind of way. I love how Parisians, and French people as a whole, revere food, and I don't at all mind how arrogant they are about the fact that they revere it (and we don't). I love how important pastry is to them, and bread, and butter, and croissants. I love that there are no Dunkin Donuts in France. And I love that baguettes are regulated by the government. Take that, Tea Party Movement.
I have a list, but by no means an exhaustive one, of places to go, and by places, I mean restaurants, cafes, boulangeries, patisseries, and marches that house fromageries, charcuteries, and chocolatiers. On this trip, I'll have two kids with me, one of whom only eats five things. It's a good thing three of them - bread, chocolate and cake - can be found on every street corner. Is it possible to get juvenile diabetes in a week?
Someone told me there are a lot of museums in Paris. I guess we'll try to fit a few in, between the trips to Berthillon (the best ice cream in Paris) and L'As du Fallafel (the best falafel in Europe, and maybe the world, according to the New York Times) and E. Dehillerin, a venerable cookware store where the salesmen wear long aprons while they fetch your copper sauteuse. The euros are at the ready.
And then there's La Maison du Chocolat, a Willy Wonka-like wonderland where the carpeting, the walls, the perfectly wrapped boxes of cakes, candies, and those macarons - all of it is suave and chocolatey. It is literally breathtaking. Not to brag or anything, but I'll be there next week. I'll also try to stop into Poilane for some apple tarts and walnut bread. Perhaps a little carb heavy, but the two together make a fine lunch.
I will hopefully be posting from France, assuming the technology Gods don't pull a fast one. Of course, if they're French, they just might.
Posted by Wendy Kaplan at 9:20 AM