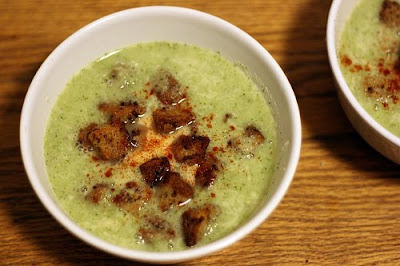 Heidi Swanson's Broccoli Soup from 101 Cookbooks.
I hate it when someone else comes up with the brilliant idea that you were supposed to come up with, but didn't. And you know it when you hear it. You think to yourself, that's totally my idea. Only, it's not your idea, it's their idea, and they're running with it.
101 Cookbooks. That's the brilliant idea I was supposed to have, but didn't. A woman named Heidi Swanson (she's cute and blond and interesting and a food photographer and a world traveler) was on her way out to buy yet another cookbook 6 years ago when she realized she had way too many cookbooks to be buying yet another one (me, totally). So she started poring through all her old cookbooks (me, totally) and decided to start a blog, her own personal recipe file that she would share with the world (could have been me, totally).
I have 189 cookbooks. And that was at last count, which I'm sure has grown because I, too, have a "problem" when it comes to buying cookbooks. Just ask my husband. I read them like novels, particularly at the dinner table when I'm supposed to be having meaningful conversation with my family.
The irony of all this is, the recipes aren't technically Heidi's, at least according to her. She's hawking someone else's ideas, and getting the ad dollars for them. Maybe I should start 189 Cookbooks, and just hawk Heidi's recipes, which are really other people's recipes, and get my own ad dollars. Hey, we're all trying to make a buck.
Just so you don't think I'm full of sour grapes today, I recommend you stop by 101 Cookbooks and have a look see. I already found a recipe I'm going to try: spinach rice gratin, which sounds like the perfect side dish for Thanksgiving. Even though Heidi calls it a gratin, we all know it's really just a casserole. Whatever.
Posted by Wendy Kaplan at 1:33 PM