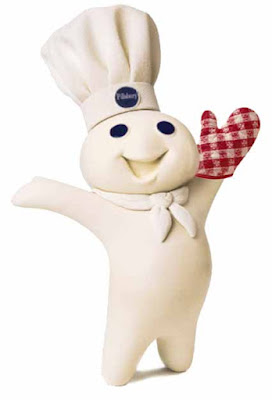 For the record, I am absolutely against baked goods that come out of a cannister. By this I mean anything in the refrigerated dough section. I am so morally opposed to the idea of pre-made crescent rolls, buttermilk biscuits, and cookie dough that I find myself breaking a fine, adrenalin-induced sweat of rage just thinking that there is an entire section in the grocery story devoted to faux dough.
Which is why it pains me to tell you that this morning, I made Pillsbury Cinnamon Rolls. My memory served me well; in raw form, they do look like scraped knees that have scabbed over. And, to make matters infinitely worse, I ate one. It was a crusty chemical bomb frosted with white goop scraped out of a plastic tub. This morning at 7:36 AM, I experienced one of the lowest points in my life, even lower than throwing up Spaghettio's in the back seat of the car when I was 7.
I did it to prove a point. For years, my husband has been having a memory-driven love affair with Pillsbury Cinnamon Rolls. These things happen. For years, I had a memory-driven tryst with my grandmother's potato soup. Then one day, I made it for myself, exactly the way she used to make it. Up until that point, I didn't know it was possible for something to taste like a vaguely grainy bowl of nothing. It - the memory, that is - was good while it lasted.
Food memories aren't just about food. They're about circumstance - when did you eat the item in memory question? Were you wearing your pajamas? Were you watching TV at the time, maybe The Sonny and Cher Show or Creature Features? Did your grandparents let you stay up late while you were eating said memory item? Was your brother not punching you while you were eating the item? All these things greatly enhance the memory.
As for the cinnamon rolls, my husband told the truth. They're ok, he acknowledged. Not great, just ok. My daughter, on the other hand, loved them. Loved Them. Greatest thing ever. Greater than the greatest macaroni and cheese, the greatest pizza, but maybe not greater than the greatest chocolate cupcake. That one needs further thought. Could it be a food memory has been born?
Posted by Wendy Kaplan at 8:37 AM