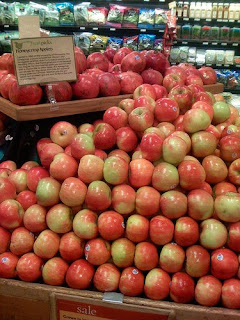 I've probably peeled over 5000 apples in my life, and that might be a conservative estimate. Many of those were for other people's desserts. In advertising, when you're writing or art directing someone else's idea, you're a "wrist"; that is to say, the big thinking has already been done, and all that's needed is your hand to write a script or layout a print ad. The kitchen equivalent is the prep cook - a major league chopper and weigher. That's how I started - peeling other people's apples and weighing out the ingredients for the cool stuff they - not me - would be making.
Eventually, I moved up from weighing to actually making. At the pastry shop, I was given the task of making the crumble filling that went out to restaurants all over Chicago. The great thing about the filling was that it was a shoot-from-the-hip endeavor. You peeled some apples, added some sugar and brown sugar, juiced a few oranges and lemons and tossed the juice in, along with a few splashes of Myer's Rum. Then you tossed the whole of it together with your hands. It was my decision how much rum to put in, how much sugar, and how much citrus. It was my crumble filling. Chances are, you ate my crumble filling at some Chicago restaurant back in 1995. That was the first taste I would have of someone actually eating my food.
I have had a good feeling about apples ever since. I particularly like Honeycrisp, which a friend/pastry colleague of mine discovered in a farmer's market 10 years ago. Now you can get them at Jewel starting in September. They're the best eating apple out there; they drip juice, and are perfectly tart, crisp, and sweet. For baking, Granny Smith's are the bomb, as it were. Their tartness mellows a little, and works against the sugar in the recipe. You need that contrast. The exception is the Golden Delicious, which I use when I'm making a Tarte Tatin, the upside down caramelized French apple tart. I served individual tarte tatins during my restaurant years. I peeled at least 25 apples a day for those tatins, and up to 50 on weekend days. Unlike Granny's, Golden Delicious will not fall apart during cooking, and you need that in a Tarte Tatin.
Mutsu and Crispin, my other two favorites, are similar to Honeycrisp but a little more tart. Winesaps are actually spicy; I had one in Seattle years ago and have lusted after them ever since.
I once ignited a batch of liquored up apples in my apartment, nearly set the place on fire, left the apples on the back stairs, then got robbed the next day because I forgot to lock the back door. I had to replace all my stereo equipment, and the cops ruined my antique quilt with oily, black fingerprint powder. I haven't attempted that since. But, boy, do I still love apples.
Posted by Wendy Kaplan at 6:00 AM