The way back machine 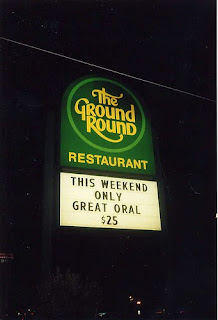 It may be 2009 where you live, but in Kalamazoo, Michigan, it's still 1983. I know this because I stopped, along with my willing family, at The Ground Round on Stadium Drive this past Sunday. Kalamazoo's Ground Round was not offering "Great Oral;" instead, they had the more family-friendly, but certainly less titillating, all-you-can-eat fajita Tuesdays.
I can't recall ever going to The Ground Round, which is surprising because I grew up in a family that worshipped chain restaurants. We were regulars at Bennigan's, Friday's, Houlihan's, and Chili's. We ate loaded potato skins, fried mushrooms and bacon swiss burgers, and though we may not be able to boast taut upper arms, not one of us is obese. This is one of my life's greatest accomplishments.
The Ground Round's marketing niche is apparently "the family-oriented restaurant where the adults can enjoy full liquor service," also known as the place where drunk and abusive parents can wallop their kids after having seven martinis. To be fair, I didn't see any walloping, just an older couple and a family who appeared to be sober, although the toddler was a little surly.
As for the menu, it isn't all about ground round anymore, although those choices are still to be had. The burgers are numerous, with the Haystack Burger standing out for its creative use of "onion tanglers," which are fried onion strips (resembling hay, hence the name?) that top the burger, along with chipotle ranch and cheddar cheese. You can also get a chopped steak, which is just a more mundane name for Salisbury steak.
The appetizer menu is plentiful, beginning with the Asian Platter, which claims to be a "Taste of the Orient." I haven't heard the term "Orient" since 1974, when it was in a La Choy commercial. If you're wary of pork egg rolls like I am, they also offer sampler platters out the wazoo. A caloric trio of potato skins, fried mozzarella sticks, and boneless buffalo wings is one appealing option.
As for dessert, the fried cheesecake was a disgusting novelty that appealed to my 9 year-old. The Choc'late Lovin' Spoon Cake offered an abundance of chocolate pudding in between two chocolate cake layers, and a glimpse into an off day for the copywriter. And finally, there were cinnamon dippers. No chain restaurant menu would be complete without some kind of dippers with zippy dipping sauces. I think dipping sauces might be the most influential restaurant invention of the 21st century.
And there you have it. Burgers, liquor, and desserts that have essentially created the health crisis in this country. How much more American can you get?
Posted by Wendy Kaplan at 6:55 AM