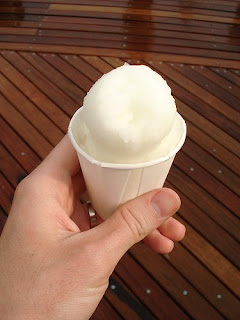 I hate finding weird things in my food. Just last night, I found a bug in my salad. I had gotten it from a reputable place (I refuse to name names), and just as I was about to take a big bite, I saw it - a flying ant cloaked in Caesar dressing and a little grated Parmagiano, dead to the world on a lettuce leaf.
I happen to have a long and illustrious history of finding bugs in my food. When my husband and I were test-driving caterers for our wedding, we sat through a series of tastings by each prospective candidate. The initial favorite presented us with a beautiful pork loin, lovingly plated, except for the dead fly that lay limply on the side of the plate. A costly oversight. Another time, we were at the now-defunct Whole Foods restaurant on North Avenue and I found a live beetle crawling playfully over my salad. The server defended it by saying the lettuce was organic and free of pesticides, hence the live bug. Dude, pesticide or no pesticide, you're supposed to wash the leaves before you put them in the bowl.
But what about things like hairs and pencil shavings and tips of fingers? My stepsister once ordered an Italian ice from a street vendor in New York only to find a hard yellow toenail after several bites. At first, she thought it was a piece of ice, so she tried in vain to melt it down by sucking on it. When she realized it was not melting, and therefore was not ice, she pulled the offending object out of her mouth and upon further examination, realized it was someone's toenail, probably that of the hairy Italian vendor, whose name just might have been Sal. Although this isn't a huge consolation, she found no hairs.
I once found a black hair in my BiBimBop at a Korean diner. I was about two-thirds of the way through when I spotted it, curled up in the kim chi. Probably a chest hair. It was a tragic, premature end to the first BiBimBop I had had in years. Even though it's on my Ten Favorite Dishes of All Time List, I haven't had one since.
So now I'm waiting for my first finger. That will be a fun post to write.
Posted by Wendy Kaplan at 4:28 PM