The hyperbole of cheez 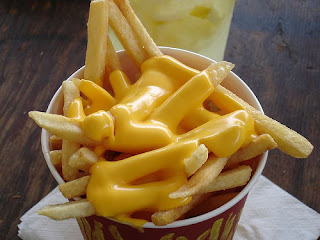 The writer Michael Pollan would never eat these cheese fries. Michael Pollan is a whole food eating man. A smart man, a serious man, a man who's been thinking about the downfall of civilization and how it relates to food - and cheez fries - for a while.
He's a writer of some stature, the former executive editor of Harper's, a journalism professor at Berkeley, and a man who uses science to prove his well-made point. If I had to sum up in one sentence what I have taken from the writing of Michael Pollan, it would be this: Don't eat anything that your great grandmother wouldn't recognize as food.
If I followed Pollan's prescription, these cheez fries would make that list. As would the Pop Tart I had this morning, and the myriad breakfast cereals that sit in my cabinet, and the various sun dried tomato pastes and spicy jalapeno ketchups and roasted garlic mustard jars that line my refrigerator door. And I can pretty much say goodbye to diet coke.
If I followed Michael Pollan's prescription, I would plunge head first into a deep and long-lasting depression. My great grandmother came from Russia. She ate blintzes and knishes and boiled beets and pickled herring. She wouldn't know what to make of tortillas or spaghetti or salsa or hot dogs, even if they are free of nitrates and nitrites.
I'm hyperbolizing here. Pollan's point is that everything we eat is too processed. And I agree. For a while, the only processed food in my house was Newman's Own spaghetti sauce. Then, when I had kids, macaroni and cheese in a box found its way into the cabinet, and before I knew it, I was saying 'yes' to Nacho Cheese Doritos.
And then yesterday, I found myself eating cheez fries at Redamak's. I spell it with a 'z' because it clearly wasn't real cheese; it was cheez whiz or some variation thereof, so I want to be very clear - FDA clear - that what I was eating was fake.
How did this happen? How did I, a former kitchen professional who made her own creme fraiche and churned her own ice cream, turn to the dark side, which is now exemplified by Tacos at Midnight flavored Doritos in the black bag?
I'm going to try to change back. No more Scrabble Cheez It's. No more Cheeseburger Macaroni, even if it is organic. No more steak umm's. Today, I start anew. I'll just have one more Pop Tart and another diet coke, and then I'm ready to go.
Posted by Wendy Kaplan at 8:24 AM