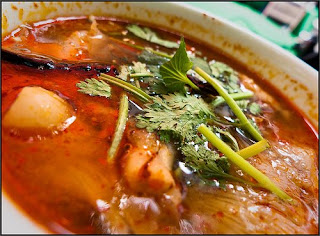 It's 94 degrees so, of course, I'm thinking hot soup. Not just any hot soup, mind you. Today happens to be the perfect day for a big, steaming bowl of Tom Yum. Just thinking about it brings a film of perspiration to my upper lip. Tom Yum is one of those soups with flaming balls of steel. It goes down like shrapnel with a lime juice chaser, and makes you sweat like Albert Brooks in Broadcast News.
I suppose on a day like this I should be thinking about Thai spring rolls - the rice paper kind that are served chilled - or Thai iced coffee. But Tom Yum is the elixir. It's the kind of soup that burns your gullet and siphons out your nasal passages, a lethal cocktail of thai chilies, stinky fish sauce and lime juice that could probably level a building if you added a detonator. But sometimes you need that - a little something to get your head straight. I eat it when I feel a cold coming on, or the bubonic plague, or paranoid schizophrenia. It's an aromatic tongue-lashing and then some, and it cures what ails you.
I had a copycat soup the other night at P.F. Chang's. It was basically Hot and Sour without the cornstarch thickener. It had zing, but it didn't make me sweat, or smell like tube socks, which Tom Yum has a habit of doing. Those Thai really know how to fend off the jungle-like heat. They fight fire with fire, and fight humidity with straw mushrooms and shrimp. Make perfect sense to me.
Another soup that kicks me in the ass hard is Mexican Chicken Soup, which is a kindlier version of its incendiary Thai cousin. Strewn with jalapenos that creep up on you, MCS has a big squeeze of puckery lime juice in case you were disengaged enough to not notice the jalapenos in the first place. Any mamacita restaurant worth its margarita salt should have a good version. This stuff is Mexican penicillin and cipro and thorazine all rolled into one.
So I'm off now to sweat profusely over a plastic carryout container of the elixir. I'm planning to sweat out some toxins, rid myself of some bad feelings, and an annoying facial tic that I've picked up in the last few weeks. Hope it works.
Posted by Wendy Kaplan at 3:00 PM