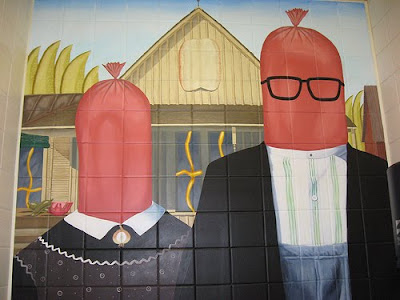 "I'm beginning to think Hot Doug's is stupid." - Bob M.
This was posted on my Facebook page a few days ago, a frustrated lament from a friend of mine, and fellow fan of Hot Doug's. I hate to say it, but I'm starting to agree with him. And it isn't because I don't love the food. The combination of sriracha hot sauce and seaweed salad on a Thai chicken sausage is one of those middle-of-the-night encased meat epiphanies that happen but once in a lifetime.
Nope. It's the hours that are killing me. I wanted to go to Hot Doug's over the holidays and when I checked the website, it said "Closed until January 6th." The guy's taking a vacation? People in the restaurant business don't take vacations. They grind themselves down to nubs, working 23 hours a day, napping on their kitchen floors for the 24th, until the morning prep staff arrives (and people wonder why chefs yell). They don't take vacations, and if they do, they don't close while they're doing it.
But I guess when you're Doug, you can. When Anthony Bourdain tells people to go eat your meat, you can go to Saint Tropez and wear a thong for two weeks, and your business probably won't be the worse for it. Some guys have all the luck.
But then there's Great Lake Pizza and Edzo's. I'm adding them to the Stupid List, and here's why. Because when I found out Hot Doug's was closed, I decided to go to Edzo's instead. It's a new burger place in my hood, and it is to burgers what Hot Doug's is to dogs: a foodie-worthy fast food joint. The meat is double ground in house, and the fries comes in beguiling flavors, Taylor Street Italian (Italian beef gravy and peppers) promising to be the most life changing.
Well, when I checked Edzo's website, it, too, was closed for the holidays. How can a place that's only been open for two months - and only open for lunch - already take a closing vacation? I smelled trust fund, I smelled sugar daddy, I smelled bank robbery. Maybe Ed doesn't need the cash. Maybe all he needs is lunch.
Which leaves us with perhaps the stupidest of them all - Great Lake Pizza. Esquire Magazine called Great Lake the "Best Pizza in the Country," better even than Pizzeria Bianco. If you have paged through this blog, you'll know that I spent a total of 27 hours waiting for pizza from that Phoenix establishment. No dice. I returned empty-handed.
But it isn't the wait that gets me. God knows, I've waited, and will continue to wait, for anything that redefines its own category. It's the operating hours. They are as follows: Wednesday through Saturday, 5:30 - 9:30. That's it. Four hours, four days of delicious pizza a week. They're open for 16 hours a week.
That's part time.
When I worked in restaurants, we laughed at people who worked banker's hours. Pussies. And now, not only are these places working banker's hours, they're making more money doing it. They're getting write-up's and buzz and long lines. It's the exclusivity club. Soon, these places are going to require top secret passwords to get in.
Am I still interested in going? Does Hot Doug make duck fat fries on Friday? Hell, yeah, he does.
Posted by Wendy Kaplan at 1:36 PM