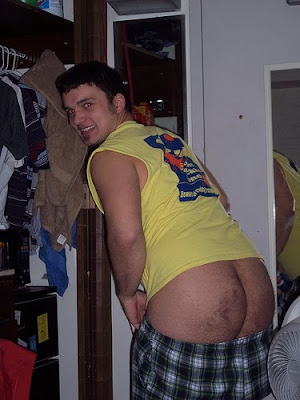 Moon - verb; to pull your pants down and show your bare ass to unsuspecting people.
I'm not 100% sure, but this may have been the guy who mooned us at Kansaku three years ago. Even though his buttocks were pressed up against the glass for a good eight to nine seconds (which may not seem like a long time, but really any amount of up-close-and-personal time with a stranger's bare ass is a very long time), I don't remember them in any photographic way. They were the ass cheeks of a male college student. Enough said.
The only reason I bring this up now, three years later, is because we went back to the scene of the crime the other night and were seated in the exact same place: the table next to the window. Once seated, I inspected the glass for ass prints. The guy had really spread his cheeks around that night, and you just never know.
We had just wanted some sushi. Kansaku is the kind of place that's creative without being scary, inventive without blowfish. Death is not on the menu.
It was still light outside when we ordered. I noticed three college students walk by - two guys and a girl. I thought the girl looked vaguely drunk, not from any personal experience, of course, just from scholarly books on the subject. In college, I spent most of my time in the stacks, and very little time at bars, hanging around the keg at frat parties, bent over toilets, semi-conscious in strange dorm rooms, etc.
As soon as I looked back at my husband, a large bare ass appeared in the window. One of the young men had apparently returned and decided to moon us. He pressed his cheeks up against the glass next to my husband's face, but his head was swiveled back and he looked right at us (see pose above). His expression was odd: disinterested, with a shrug and some regret, as if he understood what he was doing even less than we did.
I looked around the restaurant to see if anyone else was seeing what we were seeing. One waiter stood there, mouth agape. Our mouths were agape. My husband's head was 6 inches away from another man's bare ass.
As abruptly as he showed us his nether regions, he retreated, pulled up his pants and was gone. The waiter rushed over, and I thought that maybe he was going to end up comping us, but instead he wiped down our table, as if to cleanse us of the experience. And then he, too, was gone, leaving us to wonder, did that just really happen?
Posted by Wendy Kaplan at 7:17 PM