One hell of a ham sandwich 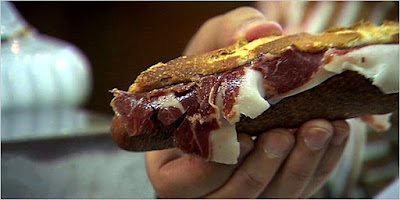 It would take a lot for me to say a sandwich was the best I've ever had. The sandwich would either have to change my life in some marked way, like by giving me a great singing voice, or be so delicious that I would keel over from the sheer surprise of it.
I've had a lot of really great sandwiches in my life. And they weren't all $14 masterpieces from that high temple of sandwiches, Zingerman's. I can remember bologna, mayonnaise, and lettuce sandwiches from my youth that were glorious, and grilled cheese sandwiches, the bread slathered with mayonnaise instead of butter, that made the tomato soup seem almost unnecessary. There was even a period in high school when a BLT on a kaiser roll, dripping with the co-mingled juices from the tomatoes and still hot bacon grease, was dinner every single night.
But the best sandwich I've ever had?
Well, Mark Bittman of the New York Times stepped up and named the best sandwich of his life. He found it here, in Barcelona. It only has two ingredients: ham and bread. Not surprising, since Spain is the ham (jamon) capital of the world, and has raised curing pork to an art form. Spanish pigs are delicious pigs.
At first, I thought this sandwich seemed a little austere to qualify as the best sandwich one might ever have. Ham and bread? I started to improvise in my head. A little bit of unsalted butter on the bread might help, as would a thin slice of nutty manchego. Or would it?
The ham in question is called jabugo, which comes from the prized black iberian pig of southern Spain. It lives a comfortable and pampered existence, hand fed barley and maize as a piglet, and then let out to roam in pastures, where it feasts on acorns until its time is up. The meat of this fancy black pig is prized for its rich marbling and distinct, complex flavor.
I'm starting to believe.
The sandwich in question can be found at Cafe Viena in Barcelona, by all accounts an unassuming place (the Panera of Spain?), and certainly not the kind of place one might find such an aspirational sandwich. With the jabugo nestled in what looks like a French ficelle - a personal-sized baguette that has a toothsome crust and a tender crumb inside - I'm imagining a salty, chewy, crunchy, slightly sweet, mildly tangy and entirely satisfying sandwich on every gustatory level.
Perhaps the flauta d'iberic d.o. jabugo is the best sandwich one might ever have. Perhaps I need to go to Barcelona and find out.
Posted by Wendy Kaplan at 8:09 AM