Til death do us part 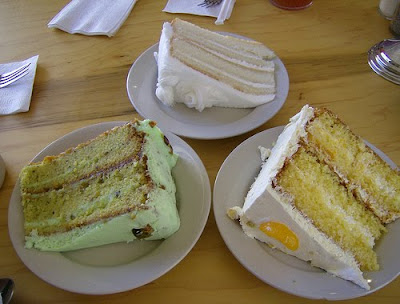 The first wedding cake I ever made nearly killed me. There were others, later in my career, that came close, too. But it was that first sadistic, buttercream-filled bastard that nearly did me in.
When my stepsister told me she was getting married (this was 20 years ago), I thought, Cool, I can make your wedding cake. I had never made a wedding cake before, but I was young, optimistic, and in cooking school. I was so enthusiastic about baking anything and everything, I would get to school at 5 AM, complete my classes, and then run home and bake more.
When I told my chef instructor I wanted to do this - make a wedding cake for an actual wedding and actual people - it was with an incredible amount of idealism. Gee willikers, I thought, I can do this.
The process went something like this.
Step 1: Bake the layers.
Actually, step 1 is to understand how much cake you need. I skipped that step.
Step 2: Bake an indiscriminate amount of cake batter into layers.
This is where the trouble started. I baked the layers as if the cake was being served at the group wedding of Seven Brides for Seven Brothers. As soon as I started assembling the thing, I realized that unless we wanted leftovers for the next 6 months, we should probably invite more people. Somewhere in the range of 1000 more.
Step 3: Frost the cake.
I spent an entire day - a humiliating, dispiriting day - frosting this cake. At one point, my chef instructor, Michel, Napoleon incarnate, came into the workroom and took a good long look at the layer I was working on. It was the bottom layer - the biggest - and it sat on the turntable looking horribly misshapen, and not even remotely suitable for a wedding. Michel held up his index finger. I thought he was going to point it at me and say, "Do you know how much you suck?"
Instead, he stuck his finger into the frosted side of the cake. The frosting was so thick, it swallowed up his finger to the juncture where finger met hand. A good three inches thick. He grabbed a spatula, stuck it into the side of the cake, and spun the turntable. The frosting came off - all seven pounds of it - with a thud.
"You do it again," that little Frenchy said.
So I did. Three more times. And it still looked like shit.
In a haze of bad esthetic judgment, I chose to garnish the entire cake with chopped pistachios and chocolate leaves. Green and brown. The very essence of matrimonial purity.
Step 4: Going to the chapel.
In order to transport the cake, I rented a van. The cake had to go in two pieces - the bottom layer and then the top three layers, which were anchored with dowel rods driven through the middle of the stacked layers.
My then-boyfriend drove while I wrangled. I didn't know at the time that a cake this size needed to be secured in some fashion, or it would slide around with every turn of the vehicle. So I spent that hour yelling "Jesus!" while the two parts of the cake played bumper cars in the back of the van.
Upon arrival, and further inspection, the cakes only suffered minor dents, nothing a few strategically placed chocolate leaves couldn't disguise. I managed to get it stacked in one monumental piece. And it was a monument - of ugliness, bad taste, ineptness, and I'll-never-do-this-again.
Step 5: Get the hell out of there.
Most pastry chefs don't have to be at the wedding where their cake is served. Given that it was family, I wasn't so lucky. There was a lot of hand-wringing and worry. There was also a lot of alcohol. So by the time the cake was served, the hard edges of sobriety had softened. The cake was deemed delicious. And beautiful (Thank you, Jagermeister shots). And we all drove off into the sunset, some of us on a fabulous honeymoon, others swearing we'd never do that again.
Posted by Wendy Kaplan at 2:03 PM