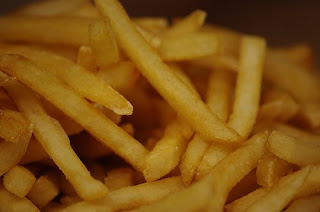 It takes a lot of chutzpah to say, "I've had the best french fries on the planet." But I'm going to say it. Oh, I know what you're thinking. You're thinking, how can you compare the duck fat fries at Hot Doug's (pretty dang good) to the spectacularly greasy ones at the now-defunct Tony's Pump Room, my favorite childhood burger joint? How can you compare the simultaneously soft and crisp cottage fries at the former Melvin's, on Rush Street, to the au naturel, skin-on beauties at Uberburger in Evanston?
But the truth is, none of them compare to 5 o'clock fries.
Because here's the thing: 5 o'clock fries are the most golden, the most perfect, the most ethereal, perfectly salted french fries on the planet. And you can only find them at one place: the McDonald's "shooting store" at 5 o'clock in the afternoon. The shooting store is a real, functioning McDonald's that has been built for the sole purpose of providing advertising agencies with an exact replica of a quintessential white-glove McDonald's in which to shoot their commercials. It's located in a crappy, broken down little town outside of Los Angeles, and most creatives I know do their damnedest to avoid writing spots that need to be shot there.
The shooting store is managed by a couple of people who have a disturbing encyclopedic knowledge of McDonald's. Not only do they know what the current crew uniforms look like down to the thread color, but they can also tell you exactly how happy the crew people should appear when greeting a customer (pleasant and happy to see them, but not effusive and gushy), and at what angle the square fish patty should sit on the round filet o'fish bun. It's a weird job.
But these McDonald's curators are also the ones who make the 5 o'clock fries, which are doled out to the agency at around 5 o'clock on a tray. They're the best McDonald's fries you've ever had because the cooking conditions are optimal: fresh oil, perfect timing, immediate service. There's a lull on the set when they're passed around and for a minute you feel ok about being in advertising and selling people stuff they don't need because you're selling these.
The makers of the fries - these McDonald's darlings - don't think they have a crappy job. They're not waiting for the end of their shift so they can go smoke some weed. They're true believers. It takes a true believer to make the most perfect french fries on the planet.
So whenever I have regular McDonald's fries, the kind you get at the McDonald's on Western near Touhy, I know they're good. But I also know what they could be. And it makes me sad for a moment when I think that I may never have 5 o'clock fries again.
Posted by Wendy Kaplan at 8:56 AM