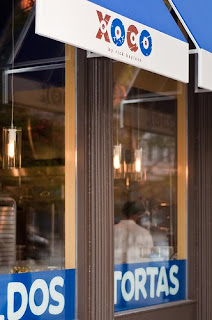 You will not see me standing in line at Xoco anytime soon. Rick Bayless' notch-above-Chipotle take-out place will have to wait. Sure, I'd love to try the churros and the caldos and the chocolate caliente. But his enviable Mexican food conglomerate has turned into a megalomaniacal empire, and becoming one of his swoony subjects is not my thing.
It's not that I won't stand in lines. I'm the Michael Phelps of line standers. There was the pizza place in Scottsdale and the sausage emporium here in Chicago, and my beloved Zingerman's in Ann Arbor. I sort of think the trek to the south side for a burrito falls in the standing-in-line-for-hours category, too. Remember the two Deliverance look-alikes at the auto repair shop who almost patched my tire?
But all those places had one thing in common: they've been open for years, and people still stand in line. They've paid their dues, and so I'm willing to pay mine. Not that Rick Bayless hasn't given his pound of flesh, but his flashy newbie hasn't.
The notion of standing in line at a celebrity chef's newest restaurant to maybe catch a glimpse of the man himself saucing a plate, or to be able to say that I was one of the first 1000 people in, makes me feel like a groupie. It's icky. I'm sure the place is fabulous. Rick Bayless is my favorite Chicago chef, but I don't need to stare at him in his chef's whites while he works. I once saw him at California Pizza Kitchen with his family and that was way more interesting.
Besides, you can get Rick Bayless food with no wait at all at the Frontera Fresco at Macy's Old Orchard. The service is always painfully slow, but the menu is expanding and they now have tacos (try the shrimp and chipotle).
I'll definitely go to Xoco, but not for a while. If you want a review of the place, check out the usual suspects: Yelp, Metromix, Gourmet magazine, etc, etc. I'm sure they'll all say the same thing: Hope you like waiting.
Posted by Wendy Kaplan at 7:27 AM