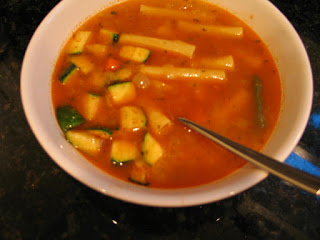 If you don't count the iceberg lettuce on my bologna sandwiches, I didn't eat vegetables until I was 23. I'm convinced I was supposed to be 5' 7", but the lack of essential vitamins in my diet kept me just a hair above 5' 4". Even though I never ate anything with color (blue moon ice cream being the exception), my mother never insisted I take a multi vitamin. I think the ever-present cigarette smoke swirling around her head may have clouded her judgment.
Fortunately, I now love vegetables and would happily become a vegetarian if it weren't for the giving up meat part. I might as well tell you now that vegetable soup is like a religion to me. I love it almost more than life itself, a love that started with Campbell's Vegetarian Vegetable. Thankfully, I have graduated from the can.
Early on in my culinary adventures, I was turned on to Soupe au Pistou, a rustic French vegetable soup that approximates minestrone (or is it the other way around? I'll let those hot-headed, romance language speakers duke this one out). Pistou is named after the basil paste that's swirled in at the end of the cooking process. It's kind of like pesto, except that it has tomato paste worked in. I'm not going to comment on which is better, pesto or pistou. That's just asking for someone to scream loudly in my face in a language that I do not understand.
The recipe I use (The Barefoot Contessa's, with many liberties taken) incorporates saffron, the comically expensive red threads that come from the crocus plant. The distinctive flavor of bouillabaisse comes from saffron. Too much if it isn't a good thing, and makes whatever you're eating taste like the medicinal solvent doctors used in the wild west to cure shingles.
I think you should use homemade chicken stock in this recipe. It's just better. But if you're giving me the finger right now, then use Campbell's Natural Goodness Chicken Broth. It tastes more chickeny than the rest.
Soupe au Pistou
1 large onion, chopped
4 small carrots, peeled and chopped into bite-sized pieces
1 leek, white part and a bit of the green chopped
6 small boiling potatoes, peeled and chopped
2 quarts chicken stock
a small pinch of saffron threads
a handful of haricots verts or green beans, cut into bite-sized pieces
1/2 cup spaghetti, broken into pieces (you can use other shapes, too)
1/2 zucchini
Add several Tbs. olive oil to a soup pot (Le Creuset rules!). Add the onion and saute for about ten minutes, until they're are translucent. Add the carrots, potatoes and leeks and saute for about five minutes more. Salt and pepper well to taste. Always make sure to taste your stock or broth before you start adding salt. Sometimes the canned stuff is really salty, so adding salt on top of that makes it almost inedible.
Add the stock and the saffron and bring to a boil. Reduce the heat and simmer for about 20 minutes. Add the green beans and pasta and simmer for 15 minutes more.
In the meantime, make the pistou:
24 basil leaves (this is approximate. I used 30 one time)
1 - 2 cloves of garlic, depending on how much you like garlic
2 Tbs. tomato paste
1/4 cup of parmagiano reggiano, grated
olive oil
In a food processor, combine the basil leaves, garlic, parmagiano and tomato paste. Process to a paste, scraping the sides with a spatula if necessary. Then add enough oil to loosen the whole thing up, about 1/4 cup.
Stir the pistou into the soup. As for the zucchini, I hate it mushy. And if you put it into the soup and let it sit there, it will get mushy (and slimy). So my solution is this: right before serving the soup, cut up the zucchini in bite-sized chunks, and briefly saute it in olive oil til tender crisp.
Spoon the zucchini into the soup bowls, and then ladle the soup on top.
This is the kind of recipe that welcomes other vegetables. Omit the carrots and make it all green by adding kale and peas. Add butternut squash in the fall, along with some chopped parsley before serving. And if you really want something grand, make some croutons by cutting up some good bread in chunks and tossing them with olive oil and a little salt and pepper Put the bread in a 400 degree oven for 10 or so minutes until they just start to turn golden. Then toss in the soup. Pretty darn great.
Posted by Wendy Kaplan at 1:49 PM