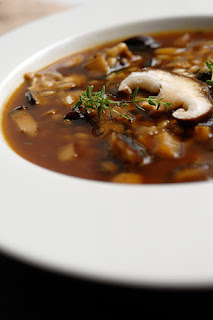 This is one of those times when I honestly wish I had thought of it first. By 'it,' I mean the genius business in Austin, Texas called The Soup Peddler. I first read about it three years ago in Food and Wine magazine. A guy named David Ansel had followed a girl to Austin, but that didn't work out, and neither did his day job, so he started to make soup in his apartment for friends. He'd then deliver it on his bicycle, the soup man peddling his wares.
It soon turned into a full-fledged soup subscription business, the kind that gets written up in Food and Wine and a million other food magazines (isn't that how these stories always go?). Customers order their soups online for the week, and then wait for them to be delivered. The empty containers are picked up the next week and reused, like old time milk delivery. I was immediately hooked. Enthralled. Completely obsessed.
That was three years ago, and the obsession lives on. I've come up with names for my business, designed logos, and tested recipes. But those productive periods are interspersed with periods of dispassion, when I indulge in a chopping reality check. Hundreds of pounds of carrots and onions a day, all chopped by me. Did I mention I suffer from carpal tunnel syndrome in both hands?
And the thing about soup - the fabulous and scary thing about soup - is that you have to be inspired to make it. You have to feel it in your loins. It has to ooze from your pores. You have to be one with the fennel bulb you are cutting, and feel love for the parsnips. If you don't, the soup will taste like it came from White Hen Pantry, where they robotically melt down huge frozen blocks of tomato florentine in time for the lunch rush.
So now I'm poring over my cookbooks (I have over 200 of them, so I've put parenting on the back burner for now - who has the time?). I've discovered Deborah Madison's new soup cookbook. She's a cookbook author, food personality, and the founding chef of the famous vegetarian restaurant Greens in San Francisco. I like her because she's a vegetarian who says sometimes you have to use chicken broth. Screw the meat-eating morality of it; it just tastes better.
I'm going on research and development field trips. The first one was to The SoupBox on Broadway. I really wanted to like it; afterall, they had lobster bisque, which reminded me of the revelatory lobster stew I had at Lochober's in Boston when I was 18. Even though it was just a bowl of thin creamy broth with a scattering of lobster meat, never have I had anything that tasted so much of pure lobster. Apparently, JFK used to order their lobster stew, too, but he gave his lobster meat to the waiters. He just wanted to sip the creamy broth.
The lobster bisque at The SoupBox tasted of cheese for some reason, and the vegetable soups - all three of them - tasted like tomato florentine to varying degrees.
So I, and my fledgling soup business, move forward. You'll probably have to hear a lot about soup in the upcoming days, week, months, and years, depending on if and when I ever pull the trigger. If you have any great recipes, throw them my way. I promise I'll give you credit on the menu.
Posted by Wendy Kaplan at 5:33 PM