Oy, it's a brisket 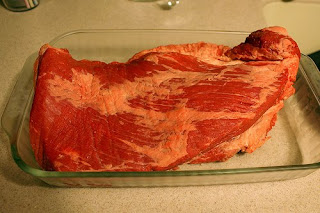 I used to feel a little inadequate as a Jew because I didn't know how to make a brisket. I'm actually half Jewish in the blood way, but still - a good brisket recipe should be floating around somewhere in my DNA. My Jewish grandmother, however, made matzo ball soup using a Manischewitz mix, so there you have it.
Fortunately, I met a guy named Warren Kushner. Warren is a commercial director who also happens to be a diminutive Jewish surfer dude from South Africa who also happens to look like Jackie Stewart, the race car driver, who also happens to be a Jewish brisket aficionado.
At this point, I want to be clear: I'm not talking about the smoked brisket you get at Sonny Bryan's in Dallas. Sonny Bryan's is arguably the quintessential BBQ joint in the Texas style. I'm talking the kind you get at your Aunt Ada's house on Hanukah. Aunt Ada, whose pumpkin-colored hair is a marvel of modern engineering and who always wears too much lipstick, has a secret recipe that involves coffee and brown sugar and sometimes prunes. But that's only a starting point for great brisket.
This kind of brisket is made in the oven. Warren Kushner leaves his in the oven for almost 6 hours. I just don't have that kind of patience. He also uses Lipton's Onion Soup Mix, but I will reveal no more.
I will reveal my recipe. I've worked on it for about three years. The great thing about brisket (or anything you braise in the oven) is that it's a shoot-from-the-hip endeavor. I'm providing measurements, but when I make it, I never measure anything. I guess I'm rebelling after my tight-ass years as a measure-happy pastry chef.
The photo above is a good representation of what a brisket for the oven should look like. You'll need a Dutch oven large enough to hold the brisket comfortably. My large Le Creuset works well.
My ingredients are as follows:
2 yellow onions, sliced
2 cloves garlic, minced
1 Tbs. dark brown sugar
a good sprinkling of smoked paprika
a sprig of thyme
1 16 oz can of chopped tomatoes
salt and pepper
2 Tbs. worcestershire sauce
a 1 - 2 lb. brisket with visible fat, seasoned with salt and pepper on both sides
Preheat the oven to 275 degrees. Heat some oil in the Dutch oven (I use 1 - 2 Tbs). When it's hot, toss in the onions and saute them over medium heat until they're soft, about ten minutes. Add the garlic, paprika, brown sugar, and salt and pepper to taste. Saute that a few minutes more. Now add the tomatoes, worcestershire, and some water. You're going to need enough water to create a bath for the brisket, but you don't want to submerge it completely. I'm guessing 1 1/2 cups will do. Bring that to a boil and let it roll for about ten minutes. Turn off the heat, and put the brisket in the pot. Cover with the lid (it needs to be tightly covered), and put in the middle of the preheated oven.
I braise mine for at least three hours and up to four. When it's done, I remove the pot from the oven and let it cool, then I store it in the fridge in the Dutch oven. This is the kind of brisket that shreds easily, so while it's good for Hanukah, it's even better for the Michigan Notre Dame game, served on a crusty hoagie roll with caramelized onions and some provolone. Sometimes I puree the braising liquid in a blender and use it as a sauce.
A brisket that size costs about $12, and provides a lot of meals (besides sandwiches, you can add it to pasta, along with some of the sauce), and you know what that means: it keeps the Jewish guilt to a minimum.
Posted by Wendy Kaplan at 4:29 PM