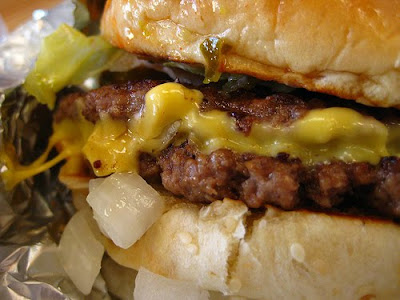 I'm just now coming out of the coma brought on by the cheeseburger I had at Five Guys today. Cheeseburgers do that to me - propel me into a state of profound happiness, sickening fullness, and lingering guilt that usually lasts for 36 - 48 hours.
Five Guys is like our In-and-Out Burger, and what Wendy's aspired to be 30 years ago: the fresh fast food burger chain. The meat isn't frozen, there are no fillers, and real people cook them. The patties aren't pre-formed, which reminds me of one of my favorite burger places of all time, Krazy Jim's Blimpyburgers, in Ann Arbor. There, they take golf ball shaped nuggets of meat and flatten them on the grill with a giant offset spatula (and then they yell at you, but that's another story). The edges of the meat are irregular, and they're never evenly cooked - moist here, crisp there. If you're lucky, little rogue pieces of meat break off and fall onto your deli paper, like a little gift. If you're into anal retentive patty making, this ain't your place.
In my burger world, burgers are lumped into two piles: those where the meat is seasoned and those that aren't. Fortunately, Five Guys is the former. I think the test of a great burger is the taste of the meat, plain. Too many places rely on the toppings to give the burger flavor. These are places that don't understand the soul of the burger eater.
Five Guys has good meat. It's juicy and crumbly and carnivorously meaty. My burger had cheese, lettuce, ketchup, sauteed mushrooms, and grilled onions. The topping options are plentiful, and claim to be free, even though we all know there is no such thing, except for what you pull out of a dumpster after a night of binge drinking. My husband got a plain double with a bunch of stuff on it. I didn't pay attention to his toppings because I was fixated on the fact that he didn't order cheese. Who orders a burger without cheese? Whatever.
We shared a small fries, and that was plenty. They were the skin on kind, another head nod to freshness that I appreciated, and nicely salted. And, for the crowning touch, I had a perfectly calibrated diet coke, half caf, half decaf. When a place has both caffeinated and decaffeinated diet coke in the self-serve, I'm pretty much in coca heaven. I mix and match depending on my state of wakefulness. Today was half and half.
Next time, I'll say hello to the jalapenos, and try the Cajun fries. But for now, since this meal should be with me for another 12 hours, I can think of nothing else but my cheeseburger with mushrooms.
Posted by Wendy Kaplan at 2:09 PM