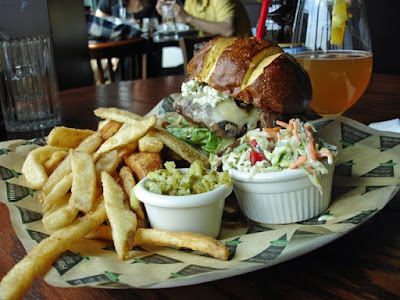 I heart Hop Haus. I went there last night for the first time, and realized that it and I were meant to be together. First, let's talk about the TV's. There's one in every booth. If you're not lucky enough to get a booth, there are 15 others scattered around the room. They're all flat screens. I thought my kids were going to wet their pants. I almost wet my pants. I also heart TV.
Although this is called a "sports pub," the food is far beyond that. All the burgers are "hand-crafted," which is kind of a silly, made-up advertising word, so let's just say this: they're the kind of burgers that are 1 1/2" thick, cooked as requested, and meaty as all get out (My 6th grade teacher, Mr. Finney, used to use that phrase - "as all get out" - so here's to you, Mr. Finney). There are 24 different permutations, including a "build your own" option, so here's your chance to put grilled pineapple and spinach and artichoke dip on your burger at the same time.
They also have wild mini burgers, which are game burgers - ostrich, kangaroo, buffalo, beefalo (??), and lamb. The burgers are dressed appropriately - the lamb burger had just the right amount of feta, cucumber salad, and slivers of red onion. They come in three's (pick your mix), or you can order them a la carte, which is what I did. The lamb burger was so delightfully juicy, it left a pool of juice on the plate, and it was a perfect example of why less is more when it comes to strongly flavored toppings.
They also have salads and sandwiches and veggie burgers and a really delicious, ambitiously garnished bowl of chicken soup. Just make sure you have at least one mini burger. You can have any of the 24 permutations as minis, too. Variety the spice of life.
Burgers and sandwiches come with fries (last night, it was the waffle variety, but on the menu, they're described as crinkle cut potato wedges with the skin on) or confetti slaw, which includes the entire produce section from Jewel, shredded and julienned. I brought home a tub of the stuff.
The desserts are the weak link. We ordered the mini cheesecake, and it came scooped like ice cream, which frankly looked like they had scraped an old piece of cheesecake out of the garbage and needed to come up with some creative way to disguise it's destruction. The brownie sundae was disappointingly average, too. But honestly, after a meal like this, do you really need dessert?
Hop Haus Rogers Park - 7545 N. Clark. Love it!
Posted by Wendy Kaplan at 6:46 AM