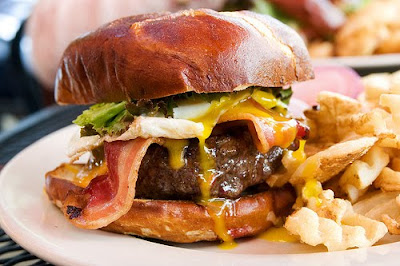 When the tattooed waitress at Kuma's Corner asks if you want fries with your burger, don't say, "Yes, please." Shout, "Hell, yeah, motherfucker!" like you're some kind of biker chick with a pierced nipple and a graveyard tattooed on your back. Rock your head up and down - maybe even bang it on the table - and tell her this is the best fucking tune you've ever heard in your entire life. Then finish placing your order.
I went to Kuma's today with two other moms. We did not refer to anyone as motherfucker. We entered quietly, ate quietly, and then left quietly, although our normally sedate mom jeans made quite possibly the loudest statement in the room (not counting the ambient thrashing death metal that was destroying the speakers).
Kuma's is a heavy metal burger bar, where just about every burger is named after a metal band. I did pretty well ID'ing most of them until I got to YOB, which is either a doom metal band from Eugene, Oregon or the opposite of what a good boy should be: crude, obnoxious, and violent. Needless to say, this mom did not order that burger.
The burgers here are fairly spectacular in a hard core kind of way. They're massive and meaty, and the toppings are grossly excessive: layer upon layer of different forms of saturated fat, all heaped on a pretzel roll, an interesting choice that tells me someone in the kitchen gives a rat's ass about the food. The cooks may be scary - they may be shooting heroin after their shifts. But they know how to make a burger.
I had a tough time making my final selection, with choices like the Goblin Cock (essentially a 1/4 lb. all-beef hot dog and all the Chicago fixin's on top of a 10 ounce burger), but I ended up getting the 1990's Texas metal band, Pantera (poblano peppers, jack cheese, tortilla strips). Mom #2 got a Neurosis (cheddar, swiss, caramelized onions, mushrooms and horseradish mayo), and mom #3 got a Mayhem (sliced jalapenos, pancetta, pepper jack and giardinera mayo). Every burger begins with 10 ounces of beef and from what I can tell, there's very little shrinkage. It's a massive piece of meat, and it comes with massive toppings. The namesake Kuma's burger sports bacon, cheddar and a fried egg, while the absurd Bongzilla carries a 1/4 lb. Sheboygan bratwurst, smoked gouda, caramelized onion, dusseldorf mustard, and jalapeno apple chutney, all on top of the standard 10 ounces of meat. Crazy.
As for the service, I'd call it knowledgeable, attentive, and not overly solicitous. Just how I like it. But if you had a heart attack here and dropped to the floor, I'm pretty sure the waitress would stand over you and say, "Too fucking bad," and tell the next patron to come on down and grab your chair. That's just the kind of place it is. As you might expect, it's very popular. Expect a wait.
Posted by Wendy Kaplan at 8:48 PM