The queen of tartar sauce 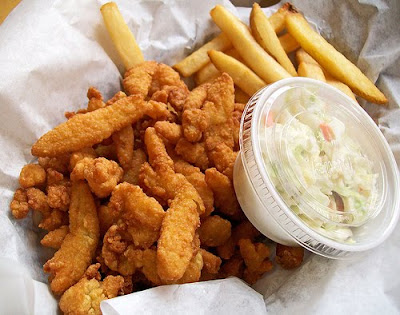 When I was a sophomore in high school, I lived in a Howard Johnson's for three months. It was a hugely weird existence, but ultimately fortuitous for me since we ate out every night, mostly at the HoJo's in the lobby. And if you know anything about HoJo's, you know that they have arguably the best fried clams on the planet (even at the one on Central Expressway in Dallas, Texas).
I think I ate fried clams every day for those three months, along with fries and their perky tartar sauce. Tartar sauce is always perky, and always white trashy, and usually delicious in that puckery kind of way. You either like it or you don't, kind of like mayonnaise. I once worked with a woman who hated mayonnaise so much, she turned down a sandwich when she was pregnant - and starving and about to faint - because there was mayo on it. I also know people who eat it out of the jar with a spoon and spread it on their ham sandwiches inches thick.
But tartar sauce holds a special place in the wide world of condiments because of what usually comes with it: fried seafood. Along with spreadable cheese and Cantonese egg rolls, fried seafood is perhaps the greatest invention of the culinary world. I include in this illustrious list clams, shrimp, fish filets (which would include fish sticks, fish fingers, fish bites and any other cute bite-size names, like nibblers, fish and chips, and fish sandwiches), and crabcakes, but definitely not whitebait (young herring fried and eaten whole, head, guts and all) or smelts.
Tartar sauce is good with other fried items, too, like onion rings and fried cauliflower, presumably because the tartness of the capers and lemon juice cuts the richness of the fried parts, but it is best with fried seafood. To have one without the other would be like having Newman without Redford. Lemmon without Matthau. Richie Cunningham without the Fonz. If there is a more inspired pairing, I, for one, would like to know about it.
Posted by Wendy Kaplan at 5:01 PM