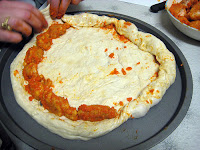 An amuse geule is a tasty little something the chef sends out before the appetizer, to be enjoyed with an aperitif. It is of his choosing, this amuse, and I think of it as something that amuses the palate, although the direct translation is "animal's mouth." Figures. The French are always trying to fuck with us in some way.
Saveur Magazine just came out with its restaurant issue, and on page 12, voila! Les amuses. They use the other common name, amuse bouche. The different amuse they picture - from a variety of fancy restaurants - are much more elaborate (and over-wrought in this non-foodie's opinion) than the ones we sent out at the "fancy" restaurant where I worked.
The lowly job of the amuse maker went to a different cook every day and you could always tell which cook had the job by the effort that went into making it. If it was Johnathan, you'd get the leftover lentils from the night before, pureed with some butter and slapped in a little crock to spread on bread. You got the feeling that his whole life was a series of half-assed shortcuts. If Stuart had the task, he would spend hours tediously creating new flavor and texture combinations. He was the over-achiever of the kitchen, but it paid off because a few years later, he was named one of "Food and Wine"'s Best New Chefs of the Year.
In that spirit, I'm going to start a regular entry called "Amuse." It will be a little tidbit, idea, or anecdote that I find amusing. Hopefully you will, too.
Today's amuse: Project X: the Stuffalo. Some bloggers in Philadelphia were quite taken with the idea of Stuffed Crust Pizza from Pizza Hut. It's hard not to be. And they also adored buffalo wings. So, the logic goes, why not marry the two and create an offspring? The Stuffalo was born (see disgusting photo above). Pizza crust stuffed with buffalo wings. I think they even left the bones in.
Posted by Wendy Kaplan at 9:42 AM