Waiting for a Hot Dog 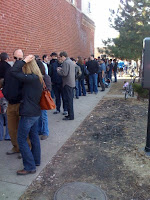 It's 10:30 in the morning and I'm making myself a hot dog. My favorite way, the Franksville way, is a boiled hot dog on a poppyseed bun with melted cheese (think processed cheese food, like Velveeta) and chopped onions. I like the kind of onions that have lost their mojo from sitting around, aerating too long (think onions at a ball park concession stand). It's an acquired taste.
I probably have hot dogs on the brain because last Saturday, I went to Hot Doug's with my friend, Bob, my daughter, Chloe, and Bob's absurdly large Irish Wolfhound, Georgia, and all we did was wait in line.  For over an hour. For a hot dog. (see all the other obsessed hot dog stalkers in line with us, above) The crazy thing was, we never even made it inside the door. We were still at least 20 people back when we threw in the towel, after standing an hour and ten minutes with a small child and a large dog who kept sticking her curious, well-meaning nose into the butt of a crotchety guy standing in front of us. Chloe had a playdate and we had to get going.
To be fair, the line wasn't just for hot dogs. It was also for duck fat fries. And the myriad exotic encased meats that Doug, of Hot Doug's, has to offer. I just checked today's specials online and if I went right now, I could get a Thai Chicken Sausage with Sriracha Mustard and Sesame-Seaweed Salad. Or a Spinach and Feta Gyros Sausage with Tapenade Mayonnaise and Kasseri Cheese. I love it that Doug doesn't mix his metaphors. If you're going to be Thai, be Thai! If you're going to be Greek, be Greek! Too many chefs want to cross too many borders and bring too many cuisines together like they're cooking at the United Nations.
But if I went today, I couldn't get the duck fat fries. They're a Friday and Saturday only proposition. So I will be going back, just not on a Saturday. I've made food pilgrimages before. And after giving it a great deal of thought, I've decided that waiting for hours for a one-of-a-kind, inventive, incredibly delicious item is totally within my comfort zone. It's waiting at a place like Red Lobster that I have a problem with.
Posted by Wendy Kaplan at 1:12 PM