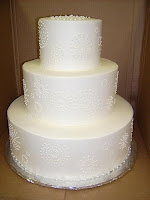 Screaming, irate chefs and unseemly temper tantrums are nothing new to the professional kitchen. But have you ever seen someone get really mad at a cake?
Raphael was an all-around lovely guy. Even-tempered, good-humored, helpful, polite, loyal, hard-working. He was Employee of the Month, Man of the Year, certified gold member of the Clean Plate Club - you name the award, he was the most deserving recipient. His job was probably the most important - and the least interesting -  in the kitchen. He baked off all the layer cakes. On Thursdays, when the primary weekend bake happened, he baked hundreds of cake layers. He would make giant vats of batters in different flavors - chocolate, yellow, almond, banana, carrot. Then, he would weigh the amount of batter that went into each pan. Because there were so many different sized pans, each one had an exact ounce amount of batter that would produce the perfect cake layer. Those amounts had been painstakingly, mathematically figured out by Raphael. He had it down to a math and a science.
But something was amiss with the chocolate cakes. For weeks, the layers had been coming out sunken in the middle. Now, this may seem trivial to you. But let's just say you're getting married. You've always dreamed of having a chocolate cake with chocolate mousse filling and fresh raspberries (each preferably hand-picked just for you, on your wedding day). You plunk down $1000 for the cake. This is the beginning of the rest of your life. You've color-coordinated the bridesmaids' dresses with the groomsmen's ties. You've had the place cards hand-lettered to look like your Gaelic ancestors may have written them. You want a cake that Martha Stewart would bless, and perhaps even feature in her next issue of Martha Stewart Weddings. You don't want a cake with a big pothole in the middle.
Raphael tried everything. He adjusted the amount of baking powder. Reduced the number of eggs. Used shortening instead of butter (it was a sad day in the kitchen when that happened, but since it didn't fix the problem, he went back to butter). Nothing worked.
And then one day, Raphael snapped.
He was pulling a large sheet pan out of the oven, and when he saw the cakes - and the sunken middles - he threw the entire hot sheet pan on the floor. The resonant THWAP! immediately brought the rest of us out of our deeply tired, overworked trances. We stared at him. He stared at the cake pans on the floor. And then he did the most unlikely thing I've ever seen a grown-up do.
He started stomping on the cakes. Jumping up and down like a petulant child, his face filled with crazed glee. Those impaired chocolate cakes were being annhilated by his heavy black kitchen shoes. But in the midst of this cake rant, as he came down one more time on the sheet pan, his weight caused the pan to slide. Unfortunately, he went with it, skimming across the floor. The whole mess culminated in a clanging crash as the pan, and his body, hit the side of the walk-in refrigerator.
He stayed down a minute, laying in hot cake crumbs. He then stood up, brushed himself off and left the room. A few minutes later, he reappeared.
"I'm sorry, everyone," he said solemnly, obviously embarrassed for losing control. He cleaned up the mess and went back to work.
After some investigative work, and a call to Rose Levy Berenbaum, the author of The Cake Bible, Raphael finally fixed the problem. We never spoke of "The Cake Incident." But I'm now much more careful around cakes because I know how much they can really piss you off.
Posted by Wendy Kaplan at 9:27 AM