I've got another puzzle for you 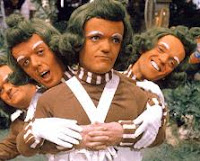 My first job in the kitchen was at a well-regarded pastry shop in Chicago. I got there at 5:30 in the morning, and worked most days until 4:30 or 5:00 in the afternoon. There was no lunch break. The only time I sat down was on the toilet, to pee. It was physically the most brutal year and a half I've ever had. During the holiday season, we worked 16 hour days, filling hundreds of pie shells, making literally thousands of tiny little tarts for office parties and holiday events. One of my jobs was to roll and finish buche de noels, which are rolled cakes decorated to look like Yule Logs. I'm not even going to tell you how many meringue mushrooms I made (because I never counted, but it was A LOT). I was beginning to think I was superhuman. And then one morning, something else crossed my mind.
I'm an oompah loompah.
My tiny co-workers scurried about the kitchen in their white t-shirts and black and white checked pantaloons (that frankly don't do anyone any favors in the flattering department). Some were carrying bags of flour around. Others were scooping and weighing sugar or breaking eggs. At that epiphanous moment, I knew: once I stepped into the kitchen, I would be summoned by Gene Wilder's tiny pan flute. He would ask me to take Violet Beauregarde to the juicing room, and see if Augustus Gloop had made it out of the tube alive. Perhaps we would all stop and break into song, some sort of cautionary tale about bad parenting. Then we would continue on with the day's tasks, all us happy little workers.
I left soon after that, to find a job where I could be Gene Wilder and have my own Oompah Loompahs. Although that, too, has its share of cautionary tales.
Posted by Wendy Kaplan at 9:31 AM