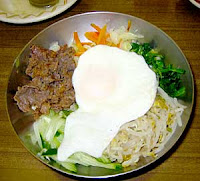 It isn't often you find a holy temple of cuisine. But I found one in Ann Arbor, Michigan. And I'm going to try not to go all M Go Blue on you, even though I just happen to be one of those obsessive Michigan fans.
Because this is really about alarmingly hot pickled cabbage. Kim Chi. Eating it is an act of bravery, because frankly it smells like a trip to the loo.  It has been described as a "feisty old crone" by one of my favorite cookbook authors, the late Barbara Tropp. And boy, is it good. But I digress.
At this point, you're probably wondering, who's Steve and what's he having for lunch? I have no idea who Steve is, but Steve's Lunch was a cultural icon in Ann Arbor when I was in school.  It was a tiny lunch counter that served pretty standard short order fare. Omelettes and fried eggs for breakfast, burgers and grilled cheese for lunch. But on the back wall was a tiny menu written in both Korean and English and that's where the riches lay. That's where you could find the Bi Bim Bop.
It's a fairly common Korean dish that Steve's has raised to an art form. First, you chose your rice. Brown was the politically correct choice in a liberal college town. I always ordered white and was considered a Republican for doing so. Minutes later, a steaming stainless steel bowl would arrive with rice, greens, assorted vegetables, grilled Korean beef and a fried egg on top. Chopsticks were handed over, along with 2 squeeze bottles: one with sesame oil, the other with hot sauce. These bottles came without instructions, so it took experience and trial-and-error to get it right. Veterans applied their seasonings with caution and confidence, knowing that too much hot sauce meant certain death to the taste buds, but just the right amount meant an experience bordering on mystical. You would then mix the whole thing together with your chopsticks and dig in.
And then there was the question of kim chi, which came as an accompaniment in a little white bowl. A 'yes' to kim chi was like embracing a life of unbridled passion and adventure. A 'no' meant life as an accountant.
Unfortunately, Steve's Lunch is no longer. But the bi bim bop lives on at little korean joints everywhere.
Posted by Wendy Kaplan at 9:05 AM