Howard Cosell, Hoe Kow and me 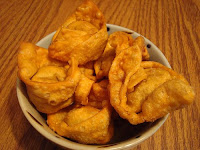 Sunday night dinner for my family wasn't a Norman Rockwell scene, with everyone gathered around the gingham-clothed table, waiting patiently for the patriarch to carve the perfectly juicy roast. We didn't ogle the big bowl of whipped potatoes, and vegetables fresh from the garden, arranged perfectly on the good china. Sunday night dinner for us was a night out at Hoe Kow. A Cantonese restaurant on Lake Street in downtown Chicago, Hoe Kow was where Jewish families went on Sunday nights to kibbutz, be seen, and eat some exotic fare, which Chinese food was back then. When I told my husband about the Hoe Kow experience, he admitted that he thought it was pronounced "Hoe-y Cow", as if Harry Caray was doing an impression of a Chinese guy, Jerry Lewis-style.
Hoe Kow's menu was a "greatest hits" of Cantonese specialties. But we always ended up ordering the same thing: beef, pea pods, and water chestnuts, egg rolls, fried wonton, and shrimp with lobster sauce. Presently, we all have cholesterol issues, and I think I know why. In the winter, the smell of fried wonton would linger in our coats for days, which I didn't mind a bit.
One Sunday,  as my father mixed the hot mustard and duck sauces for the fried items (we let him do the mixing of most everything at restaurants since he seemed to be the expert at such matters), my brother says very matter-of-factly, "There's Howard Cosell." Howard Cosell. He was with Irv Kupcinet, and both their wives. "Kup" was a local columnist, and......who cares? It's Howard Cosell! Of Monday Night Football and The Wide World of Sports! The thrill of victory, the agony of defeat! There was a Jewish celebrity at our Jewish Chinese restaurant, and I wanted his autograph.
I convinced my brother to go with me to their table. "Mr. Cosell, can we have your autograph?" He was gracious and lovely, and signed our napkin. Then he handed the napkin to Kup. Why is he doing that? I thought. I don't want that guy's autograph on my genuine Howard Cosell memorabilia. But it was too late.  Irv Kupcinet, "Kup."   And of course, it was perfectly legible. Howard Cosell's signature was a scribble. It could have said anything. We thanked them, and went back to our table.
I glanced at the napkin all night long. "Kup," "Kup," "Kup." I kept seeing the word "Kup" and then a scribbly line underneath that said, "Howard Cosell." I swear, it did.  Not many people believed me at school the next day as I showed it around. So I started touting Kup. "You don't know who Kup is? Oh, yeah, he's a big deal sports guy at the Sun Times. Big. Bigger than Cosell."
Hoe Kow is long gone, but they really did have the best egg rolls in town, especially if you were a nice Jewish girl looking for some good Chinese food and maybe, just maybe, a famous sports guy's autograph.
Posted by Wendy Kaplan at 10:25 AM