Are burgers getting too serious? 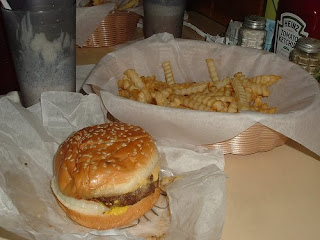 I had the best burger of my life on Saturday. I know; that's a pretty grand statement coming from someone who started a Burger of the Month Club to find the best burger in Chicago. If this burger hadn't been at Redamak's in New Buffalo, Michigan, I would have just completed the mission.
The great thing about a Redamak's burger is that it's an unserious burger. It comes to your formica table wrapped in greasy deli paper, with some big, black letters written on the top to indicate the specifics of the order, in my case CNM (cheeseburger, no mustard).
Those letters make me feel like a number, which isn't necessarily a bad thing. There's an ordinariness in the burger experience that I want. And Redamak's is pretty ordinary (in a good way). The meat isn't special. It's just really good meat, with lots of meat flavor. The cheese is good, too - American that melts exceedingly well. A thick slice of onion, some pickle slices, and a good squirt of ketchup finish the thing off.
But Redamak's isn't a temple. It's more like camp, and what could be better than having a really good burger at camp. It's built to look like a log cabin, with cabin-y accoutrement inside (plus local college football memorabilia, which ends up to be a three-way war between Notre Dame, Michigan, and Michigan State). They added a large screened-in porch several years ago, which is loud and breezy, and where we like to sit. All the servers (an odd group of happy, middle-aged Moms) wear Redamak's t-shirts and seem to love their jobs.
There was a recent article in the New York Times about how some top chefs have undertaken the endeavor of creating the perfect burger. A disturbing development. I don't know about you, but I don't want my burger made by a top chef. I'd rather have a top short order cook do it. Which goes back to the ordinariness of the experience. A burger shouldn't be scientifically reduced down to a percentage of cuts (20% brisket, 60% sirloin, 20% Kobe) and an elaborate cooking method.
A great burger isn't perfect. It's spontanteous, in the moment. And it's certainly not labored over. One of the top top chefs, Daniel Boulud, who is highly respected and very talented, assembled a team - a team - to create a burger for his restaurant, DB Bistro Moderne. Another New York restaurant, Minetta Tavern, has a $26 burger, priced that way because of the "special grind" of the meat. Please.
The guy cooking your burger at Redamak's isn't French, never went to cooking school, and may have no front teeth. But that's why his is the best burger you'll ever have. Because it's not precious, it's not intellectualized, and New York food critics will never write an article about it.
Posted by Wendy Kaplan at 9:18 AM