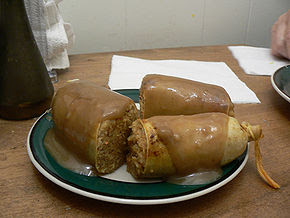 Have you ever heard of kishkes? They're a sausage-like thing, made from kosher beef casings, filled with a delectable combination of matzo meal, rendered chicken fat, and spices. Or what about gefilte fish? Ground up fish, usually carp, pike, or mullet (the fishiest of the fishy) that's formed into balls. In their most common form, the mealy fish balls end up in glass jars with a lightly jellied fish broth and a Manischevitz label. They're usually served with a horseradish vinegar, and why not? Why wouldn't you serve fishy fish balls with a palate numbing liquid that could disguise the taste of stagnant pond water?
Why couldn't I have been Italian?
Italians have pasta. Has there ever been a disgusting pasta dish? I pulled out my old cookbook, "The Top One Hundred Pasta Sauces" to find out. Bucatini con i Funghi sounds gross, but it's just mushrooms, my favorite fungus in the whole world. Pasta chi Vrocculi Arriminati sounds vaguely criminal, and being from Sicily probably is, but it's just cauliflower sauce, and the only objectionable addition might be a few anchovies. I happen to appreciate the judicious use of anchovies, so I'm square with this.
Even shellfish has the lyrical name "Frutti di Mare." Observant Jews aren't even allowed to eat shellfish (thanks a lot, archaic dietary laws), so they're left with lots of smoked fish and the ugly-girl-with-mannish-eyebrows term "gefilte fish." Fortunately, I am not observant and eat shrimp and other shellfish aggressively.
The Italian table is colorful: red tomatoes and peppers, green basil, vegetables, interesting shellfish, fruit. The Jewish table is brown, and often covered in burlap. The Italian fat of choice: golden olive oil. The fat of choice at the Jewish table: schmaltz. Chicken fat.
The Italians have Mario Batali. Who do the Jews have? Joan Nathan. She's like your college roommate's mom from Long Island. She's really knowledgeable, and a great cook, but the chances of her playing the Rolling Stones over Klezmer music at one of her many restaurants is close to nil.
So, it's great to be a Jew. But when there's a family get-together where food is being served, I'm sneaking off to my Italian friend, Bob's, house for some lasagna al forno and a nice Barolo. Salud!
Posted by Wendy Kaplan at 6:23 AM