When the novelty wears off 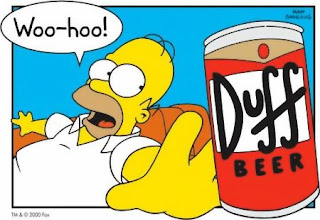 I'm a little hung over this morning. Last night, I had Donut and Beer ice cream at Ben & Jerry's. It was sort of like having a Krispy Kreme with a Schlitz chaser. And not in a good way.
They weren't promoting it like they were promoting Goodbye Yellow Brickle Road, the Elton John flavor. That one got its own poster and tag line: "The batch is back." Boy, I'm glad I'm not in advertising anymore. When you read a line like that and you're in advertising, you try to reassure yourself that you'd never write anything like that - that punny - and then you realize that you have written stuff like that. Of course, you've written stuff like that. You sell crap for a living, and you'll pretty much write anything to sell the crap, even though you lie to yourself and tell yourself you're above that.
Anyway, the Donut and Beer ice cream is a holdover from the Simpson's Movie, circa 2007. In our local Ben & Jerry's, it was at the very top of the flavor menu, barely visible, a little white slip of paper with the name sloppily handwritten in black pen. Talk about lack of excitement in the presentation. When I tasted it, I understood why. It was annoyingly sweet, with a barely detectable, stale beer-y taste at the back end. And that's being generous.
I checked out the history of the flavor, and apparently it was a one night only deal, making an appearance in Springfield, Vermont for the Simpson's Movie premiere in 2007. It was originally called Duff 'n D'ohnuts (the name of which can only be bested by Chocolate Chip Cookie D'oh, another B & J flavor tribute to the Simpson's), and it was chocolate ice cream whirled together with a cream stout-flavored ice cream, with chunks of chocolate glazed donuts mixed in. My version was the wan color of vanilla with nothing mixed in.
So I'm wondering this: what exactly is this incarnation of Donut and Beer ice cream? The backwash from the original incarnation of Duff 'n D'ohnuts that has been relegated to the corporate freezer for the past two years, and is now being brought out because Ben and Jerry are on vacation in Maine, and the second in command has lost his mind and is now releasing all the failed flavors, and has also procured a giant ray gun to destroy the Cold Stone Creamery headquarters in Scottsdale?
I've never been a big fan of fanfare ice cream. When the novelty wears off, you're left with a bunch of stuff that doesn't go together. And I know I'm in the vast minority on this. So I'll stick to my chocolate chip, and you can have your twisted pretzel chunky cherry garcia monkey moussetracks phish food with ribbons of liquid nitrogen white chocolate lime curd, and we'll all be happy.
Posted by Wendy Kaplan at 7:19 AM