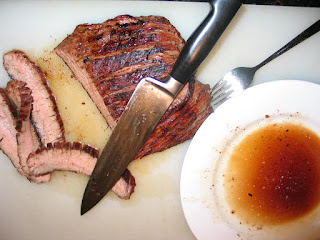 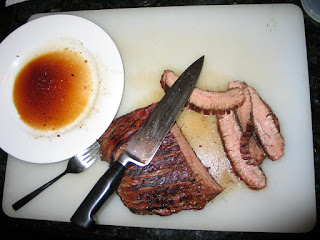 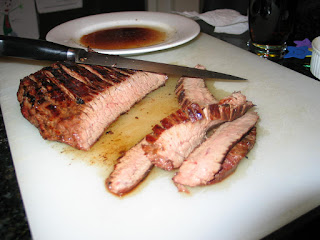 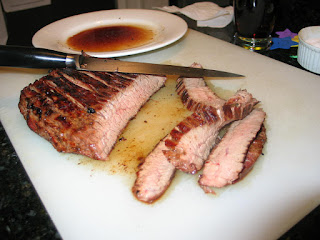 Why is it that other food bloggers seem to channel Richard Avedon with their shots of fried green tomatoes and weeknight casseroles, while I seem to channel my Aunt Maxine, whose photographic skills have consistently produced pictures that are so distorted, perfectly normal people look as if they belong in institutions for the criminally insane?
I am so not a photographer. Which is why I had my husband take these pictures. During the life of this blog, my attempts at producing even vaguely serviceable food shots have been lame. Not that these are that great, either. But that steak does look mighty good.
It's bul go gi - Korean barbecue - and you should make it this weekend. It's not totally authentic - I think boneless ribeye is normally used, and this is flank. But the idea is there.
The marinade is easy: put 1 peeled kiwi, 1 chopped onion, a dousing each of soy sauce, Chinese cooking wine, and sesame oil, a couple of cloves of garlic, a spoonful of sugar and salt and pepper into a blender and press "go." I marinated the raw meat for about an hour (next time, I'll add a couple of hours to that), and then tossed it on the grill. Two pounds of meat fed four of us, which is like Refrigerator Perry portions. As Homer would say, Mmmmm, steak.
Posted by Wendy Kaplan at 10:39 AM