Chinese in a previous life 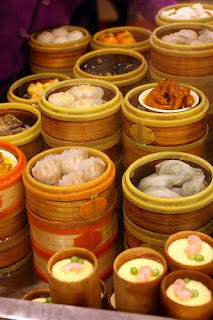 9000 pounds of Chinese food fell off a truck yesterday and onto the Tri-State tollway. I immediately wondered whether bystanders were looting the stuff, because that's what I would do if I saw a bunch of bamboo steamers rolling down the highway, carrying dim sum. I'd yell, "Jesus, everybody, grab an egg roll!" and then grab as many as I could for myself. Chinese food splattered all over the street is still Chinese food, as far as I'm concerned.
It's no secret that I am deeply in love with the stuff, so much so that I wonder sometimes if I wasn't Chinese in a former life. There is nothing Chinese I don't like, with the exception of congee and chicken's feet. Congee is nothing more than gruel. And chicken's feet are feet. Enough said.
I've had some great Chinese food in the past 40 plus years. The Mandarette in Los Angeles stands out, and not just because I saw Lisa Bonet there with her nose pierced, saying grace with her cute, dread-locked family before digging in to their scallion pancakes. The food there is fresh, and not too oily and not too brown, and tastes of ginger, garlic and scallions, the holy trinity of Chinese cuisine. And celebrities eat there on occasion, which never hurts.
But the best Chinese I ever had was at a place called China Moon Cafe in San Francisco, about thirteen years ago. The chef was not Chinese, but Jewish, and a woman, and a Mandarin-speaking Chinese scholar, and about three feet tall, which makes her Chinese-like, at least in the height department. Her name was Barbara Tropp, and she was a trip.
Her food was authentic Chinese with a bubbly California sensibility. She gave dishes fun names, like Cosmic Chaos soup, but was pretty strict about adhering to the yin and yang principles of cooking, and keeping flavors Chinese (no crossing borders), but infinitely more interesting. I know one purist who turned up his nose at China Moon, and then after going there, caved. You couldn't not like how inventive, yet completely true to the cuisine, Barbara was.
Her China Moon Cookbook is by far my favorite (non-pastry) cookbook, as much for the witty and brilliant writing as for the recipes. Thanks to Barbara, I've pickled ginger and made ma-la oil, which, translated, means "mouth numbing" oil. I now make close-to-perfect steamed rice, and a pretty good fried rice, and I've made Chinese steamed buns with zippy dipping sauces, and cold tomato ginger noodles, which - at the risk of sounding nauseatingly corny - are the embodiment of the word "delightful."
So here I sit in Chicago, with 9000 pounds of bamboo shoots on the Tri-State, a handful of carryout menus from the old stand-by's, and no sign of the midwestern Barbara Tropp. So if you know her or have met her, please let me know. In the meantime, I'll just consult the cookbook.
(On a sad note, Barbara died in 2001 of cancer, at the age of 53. China Moon died with her.)
Posted by Wendy Kaplan at 11:15 AM