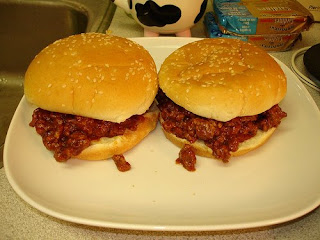 Let's just get this on the table right now: I opened a can of Manwich tonight. And it wasn't the first time.
I think Manwich is a work of high culinary genius, even if it is made by some sort of automated cooking system using an impersonal corporate recipe borne out of an ignorant bureaucracy. It's sort of like Heinz ketchup in that the flavors have melded together to become something else altogether, a higher order of loose meat sandwich.
I've made sloppy joes from scratch before but it made me feel pretentious. This is one thing that's just better out of a can, and you can't say that about a lot of things. You can't say spaghetti is better out of a can, or chicken noodle soup is served well by being in a can, or chili or beef stew or vegetables, for that matter. But Manwich is.
I once made sloppy joes for family meal at the last restaurant I worked in. I chopped - and cried over - 12 onions, minced 7 green peppers, measured out the tomatoes, brown sugar and vinegar. I seasoned it properly, lovingly, obsessively with a secret blend of 6 spices, and spent an absurd amount of time picking the right kind of bun. Some women spend a ridiculous amount of time picking out shoes. I spend an equally absurd amount of time picking out buns. Sesame seeded would be the correct choice here.
All my efforts were scoffed at. Dismissed. Those ungrateful low-lifes - especially that one cook with the prison record and foot odor that was so bad, you could smell it through his shoes - condescended to my meal. But maybe I should have made it with Manwich. Not only because these people (and I use that term loosely) didn't deserve my time. But also because sloppy joes are can food.
(It is now Wednesday morning, and I'm discovering that sloppy joes are also really delicious breakfast food)
Posted by Wendy Kaplan at 6:42 PM