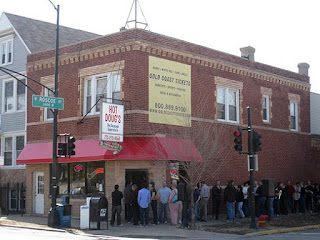 Apparently, the magic hour is 11:20. That's when I arrived at Hot Doug's on Friday to find a medium-short line, similar to the one above. I've decided that the waiting part, or the 'pre-meal' as I will now call it, is akin to waiting for your meal at an ordinary restaurant, except that you haven't ordered yet. And you're standing outside. A stretch, I know, but you have to come up with some semi-credible explanation as to why you're waiting in a line this long for a hot dog.
Forty minutes later, I ordered the Sandra Chase, which was "Today's Celebrity Sausage." I have to confess: I have no idea who Sandra Chase is, so I googled her. There's a Sandra Chase who has a homeopathic medical practice in Fairfax, Virginia, and another with a general dentistry practice in San Diego. A different Sandra Chase gave $1250 in political contributions in 2008, but to which candidate, only Sandra Chase knows for sure. I should have asked, "To which Sandra Chase are you referring?" because if my sausage had been named after Sandra Chase, the one-armed albino serial killer, or Sandra Chase, the pathological liar, I might have chosen the Dave Kingman (my friend, Bob's, choice) or the Keira Knightley (mighty hot!) instead.
Sandra Chase, the sausage, was a rosemary-smoked chicken sausage with rosemary-garlic mustard and caruchon cheese, which is a fancy sheep's milk cheese from France (had to look that one up). It tasted better than it looked. I think it's fair to say that all sausages fall into the "has a great personality" category. Sausages do not possess the physical beauty of, say, a ripe peach. When someone says, "That's a good-lookin' sausage," what they really mean is, "I've had a few beers, and by a few, I mean 27."
Bob and I shared some duck fat fries, which, ironically, were good lookin', and tasted good lookin', too, although I don't think I could tell the difference between duck fat fries and non duck fat fries in a blind taste test.
We paid $10 for the meal and at first, I thought it was because I know Doug. Well, I used to know Doug, back in grade school. He was my brother's friend, and I have a distinct memory of all of us, with the addition of their friend, Ziggy, standing around in my kitchen while Ziggy put the needle nose pliers into an electrical socket. We all lived. But, no, the cheap meal was not an isolated incident of post-electrocution favoritism. Doug likes to make up prices as he goes along. So if he charges you $75, figure it's because he doesn't like you.
Hot Doug's, the Sausage Superstore. Worth the Wait.
Posted by Wendy Kaplan at 2:16 PM