All this for a burrito 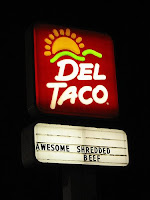 It's impossible for me to embark on a road trip in search of food without some kind of chaos ensuing. Today, on my way to the only Del Taco in the entire state of Illinois, I found myself on S. Cicero Ave. with a flat tire. I felt it first. Then I heard it. Then a cabbie with a turban pulled up next to me and started pointing at my rear wheel with a disapproving look and a shake of the head, like it was my fault instead of the junkyard they call the Stevenson Expressway.
Fortunately, S. Cicero has a gas station every 100 feet. But have you noticed that gas stations aren't gas stations anymore? They're convenience stores with gas pumps. So the woman in the sari behind the bullet-proof plexiglas was about as interested in changing my tire as I was. But she did point me to the auto repair shop next door where, according to the sign on the wall, customer service is their number one goal. Lucky for me. I talked to a guy who looked like Jon Favreau in the pudgy years. Thankfully, I didn't have to talk to the other two guys who looked like the banjo players in "Deliverance."
Half an hour later, and $20 poorer, I was on the road again, with the offending shard of tire-piercing scrap metal on the dashboard. For those of you who don't live in Chicago, this part of town is not picturesque. It's a dirty, 7 mile long strip mall with a disproportionate number of Just Tires and White Castles.  The Motel D-Lux has free movies and mirrored water beds, and hopefully a hose down service. I will not be staying there any time soon.
All this for a burrito. And it's not as if it's the best burrito in the world, if there even is such a thing. It's just that the Del Beef Burrito encapsulates my entire high school experience. I ate one at least three times a week during my junior and senior years. And while friends of mine used Del Taco as a late night, post-drinking food emporium, I actually ate there for dinner, and always in my car, which was a 1978 white Camaro Z-28 with light blue vinyl interior. It was the coolest fashion accessory I owned, and made me infinitely cooler than I really was. Which is why I never wanted to get out of it.
As for the burrito, it hasn't changed a bit. It's the exact same flour tortilla wrapped around the exact same seasoned ground beef and shredded cheese. No lettuce, no tomato, no beans. It's neat and tidy and definitely not as big as my head, or anyone else's. Which is just how I like it. The Del Beef comes with little packets of hot sauce. The original Del hot sauce is now considered the mildest version of the expanded line of three. Inferno is the hottest, but definitely manageable.
The drive-thru is open 24 hours a day, so if I ever find myself drivin' around in my station wagon at 2 AM, jonesin' for a Del Beef Burrito, I now know where to find one.
Posted by Wendy Kaplan at 5:20 PM